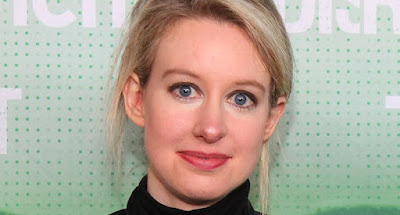 While a legal decision about her behavior as CEO lies in the future, the verdict on her character appears to be in. Elizabeth Holmes is a fraud.

This judgment, proclaiming Elizabeth Holmes a "fraud," comes from a recent article in Alternet.

Another recent article, from the Mercury News, highlights comments by Phyllis Gardner, a professor of medicine at Stanford University. Gardner, who knew Holmes when Holmes was a student, similarly concludes that "fraud" is the right word to describe her.

The quotation excerpted from the Alternet article, and placed under Holmes' picture, above, refers to an important distinction. In human affairs, what is "good" is not the same thing as what is "legal." What we think of as "bad" actions may, in fact, be perfectly "legal," and it is certainly not true that all "legal" actions must be counted as "good."

In its article about Elizabeth Holmes, who founded the company Theranos, Alternet is arguing that we should be paying more attention to the "character" of our leaders, instead of focusing our attention on whether or not they have acted "legally." I definitely agree with that! It is important to note, however, that in using the word "fraud" with respect to Holmes' behavior, both Alternet and Phyllis Gardner are utilizing a word that does have a distinctly "legal" meaning:

Fraud is generally defined in the law as (1) an intentional misrepresentation of material existing fact (2) made by one person to another with (3) knowledge of its falsity and (4) for the purpose of inducing the other person to act, and (5) upon which the other person relies with resulting injury or damage. Fraud may also be made by an omission or purposeful failure to state material facts, which nondisclosure makes other statements misleading.

The numbered phrases are all necessary to find that "fraud" exists. Those are the "elements" of the crime. Before characterizing someone as a "fraud," thus, the more cautious approach might be to wait for the trial. The "is" word, which always states a purported equivalency, doesn't leave any space for the idea that a claim that someone acted illegally ought to follow, not precede, a judicial determination in which the accused has the due process right to mount a defense.

Alternet says that "Elizabeth Holmes [equals] a fraud," and cites to the fact that Holmes typically wore a black turtleneck, in imitation of Steve Jobs. In all fairness, that does not, at least to my mind, indicate that all the elements of "fraud" are present. Something about this Alternet article on Holmes struck me wrong, even though I completely agree that "character" is always key to a proper evaluation of a person's life and conduct, which is one of the main points that Alternet makes.

In trying to puzzle it out, and to discover why I felt uncomfortable with these articles using the word "fraud" (though I hold no brief for Elizabeth Holmes or Theranos), I decided that I was uneasy for the following reason.

Assignments of personal responsibility (as in a judgment that says that a person "is" a fraud), are the kind of judgments that really do call for some kind of a "trial," for some kind of official determination, in which both sides get to be heard. A "trial," of course, does do that.

Instead of focusing on Holmes and her alleged "fraud," and assigning personal responsibility without giving Holmes the right to defend herself, I think the Alternet article might have more correctly focused on the collective failure of those whom Alternet says that Holmes "defrauded." Those who invested in Holmes' business failed to use good judgment. What about the character of her high-profile and prestigious Board Members? What about all those prestigious people who gave her lots of money and touted Theranos? What about their character? Don't they have some responsibility for having been so wrong?

Our society is more and more willing to accept "hype" and overstatement as a foundation for decisions about what we ought to do, and about where we should invest our resources. We celebrate Uber and Tesla. It seems to me that they are rather high on hype and overstatement. They may well turn out to be economic failures, just as Holmes' company, Theranos, was. The Theranos story, in other words, could be a learning experience for all of us, if we understand that what happened was a collective failure to verify before proceeding. To my mind, the damages caused by the Theranos debacle (and they are real) cannot be so easily attributed to one person (a "fraud"), if that means that we let everyone else off the hook.

Personal blame and shame? Let's have a "trial" before we state our judgment (in other words, in this case, let's hear from Holmes, too, as well as those who accuse her of "fraud").

Beyond affixing personal responsibility when a "fraud" has been perpetrated, we have a collective responsibility when we start believing something that "just ain't so." I think that what happened with Theranos is a reflection on the character of those who invested, and believed in, and promoted Holmes and her company, as much as it reflects on the character of Holmes, who beguiled so many.

Let's look to our own willingness to build a society on hype. That is at least as big a danger as the presence of those "frauds" who will use our own lack of judgment and good character to "take us for a ride," and to relieve us of money that we can't afford to lose. The name "Bernie Madoff" comes to mind. Remember him?

If we don't watch out for our own susceptibility to hype, we will soon be back bemoaning the character of those whom we will denominate as "frauds,"  after we have made the error of trusting them, and what they say, without requiring appropriate verification. Only if we take our own responsibilities seriously will we avoid being gulled by the "frauds" who are beguiling us all, even now!