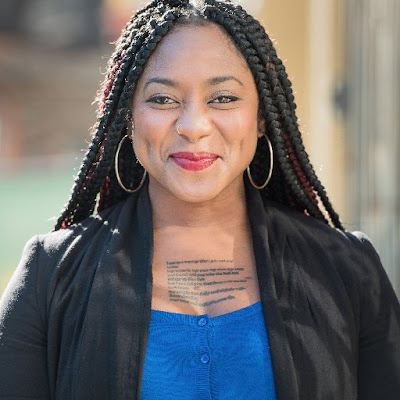 Pictured above is Alicia Garza, who co-founded the Black Lives Matter movement in 2013. On May 29, 2019, a column she wrote appeared in The New York Times.

Garza's column was titled, "Dear Candidates: Here's What Black People Want." The column provides a report on findings from a statistically valid survey of Black people, carried out under the aegis of the Black Census Project, which Garza initiated in 2018.

Garza's article is definitely worth reading. One specific line struck home to me:

Fifty-two percent of respondents said that politicians do not care about black people, and one in three said they care only a little.

Here is what struck me about this particular statement: The question presented to those people being surveyed apparently suggested that "politicians" were, in some fundamental way, different from those answering the survey questions. There was an implicit assumption at the base of the inquiry. That assumption was that "politicians" are in a separate category, and are thus to be differentiated from from the ordinary people who were being asked to give their opinion about whether or not these "politicians" care about Black people.

Here is my reaction: It is natural to assume that "politicians" are different from the rest of us, and that they are a special category. I doubt that race has anything to do with this assumption, either; I think it is likely that white people would have answered the survey in just about the same way, had the question been, "how much do you think politicians care about white people?"

Those in that "politician" category don't really care very much about anybody (except probably about themselves). I think that this is a generally held assumption, or maybe "conclusion" is a better word, since this observation can be buttressed by an examination of how those "politicians" act.

Here is what I thought, having had this reaction: In a nation that truly believes in (and practices) democratic self-government, the "politician" category disappears. All citizens are allowed to, and expected to, participate in politics, and so instead of a separate category of "politicians," put in charge of the government, we understand that all citizens are ultimately in charge of the government, and what the survey calls "politicians" are in no separate category at all. They are simply those citizens who have been elected (at a particular time and place) to represent all the citizens in an official capacity.

To put our brand of democratic self-government in historical perspective, it has been our official belief that we have a government, "of," "by," and "for" the people. If we assume that "politicians" are the only ones who get to make governmental decisions, then the key question is whether the decisions they make are "for" the people. If they are not, then it's pretty clear why those so-called "politicians" are held in low repute.

However, if we see ourselves as truly self-governing, and we know, believe, and experience a government that is actually "of" and "by" the people, then it is "the people," and not "the politicians," who are responsible for the state of our government.

A lot of people are hanging around today, bemoaning the fact that the "politicians" are not really acting "for" the people, and that they do not seem to "care" about the people, or that they only "care a little."

Let's remember that WE are the ones in charge. If our elected representatives don't "care," then there is a clear remedy. In our system of democratic self-government, it is OUR option to vote our representatives out of office if we don't like what they are doing - and if they simply don't seem to "care" about the things we care about. A government "of" the people, and "by" the people, is almost always going to be a government that is "for" the people. To the degree that we are not exercising our powers of self-government, it should be no surprise that those who have assumed our governmental powers, the "politicians," are performing in a way we don't like.

Imprisoned by bad government, and by a government that just doesn't "care?" Well, the key to that kind of prison is in our own hands.