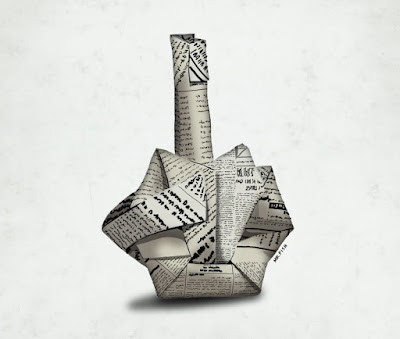 Chris Hedges, who writes for Truthdig, reminds us that George Orwell's book, 1984, depicted a political world in which everyone was called upon, periodically, to indulge in "two minutes of hate."

Hedges says that the mainstream media are orchestrating this practice in the world of today. He makes a pretty good case, too, in an article worth reading.

Mass media has degenerated into not only a purveyor of gossip, conspiracy theories and salacious entertainment but, most ominously, [into] a purveyor of hate. Matt Taibbi, the author of “Hate Inc.: How, and Why, the Media Makes Us Hate One Another,” has dissected modern media platforms in much the same way that Herman and Chomsky did the old media.

The new media, Taibbi points out, still manufactures consent, but it does so by setting group against group, a consumer version of what George Orwell in his novel “1984” called the “Two Minutes Hate.” Our opinions and prejudices are skillfully catered to and reinforced, with the aid of a detailed digital analysis of our proclivities and habits, and then sold back to us. The result, Taibbi writes, is “packaged anger just for you.” The public is unable to speak across the manufactured divide. It is mesmerized by the fake dissent of the culture wars and competing conspiracy theories. Politics, under the assault, has atrophied into a tawdry reality show centered on political personalities. Civic discourse is defined by invective and insulting remarks on the internet. Power, meanwhile, is left unexamined and unchallenged. The result is political impotence among the populace. The moral swamp is not only a fertile place for demagogues such as Donald Trump—a creation of this media burlesque—but channels misplaced rage, intolerance and animosity toward those defined as internal enemies.

Well, I do remember some things. I remember some of those sixties songs. One of them prescribed an antidote to hate. It is still worth singing that song!