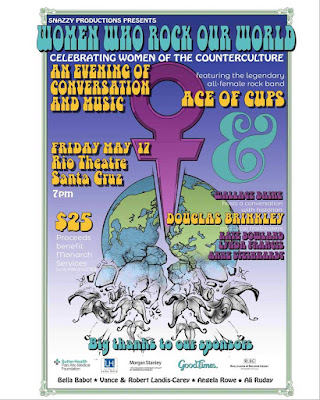 I hate to confess (as the sixties came and went), that I pretty much missed out on "sex, drugs, and rock and roll." Because I did, I was particularly pleased to attend that benefit held last night, featuring women who could speak from personal experience to all of the above.

PLUS (and it was a big plus), there was a mini-concert by the Ace of Cups, who were introduced by Santa Cruz County Supervisor John Leopold. The Ace of Cups is an "all-lady band" from the sixties (that's their description), and the band showed up in Santa Cruz with a sample of their new double-CD. You can get the flavor and a little bit of their story right here:


You can also order the band's double-CD (and sample some songs and videos) by clicking this link.

There is very nice little book that comes with the double-CD, and the back cover promises: "TO BE CONTINUED." I hope so. The band sang a song last night I would like to hear again, and it is not on the CD:

The balance hangs. It could go either way.

I would like to study those lyrics, because that is what I think, too. It isn't only The Ace of Cups that has some unfinished business to deal with, holding over from the sixties: Peace, love, and brotherhood, and an end to imperialist wars...

It could go either way.