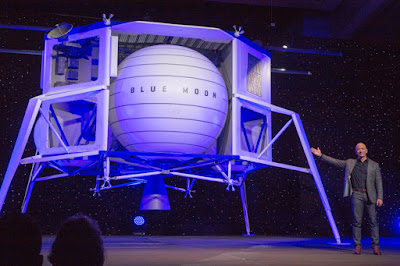 Bezos says: “It’s time to go back to the moon. This time to stay.”

When you are (or used to be, anyway, before your divorce) "the world's richest man," grandiose projects are nothing out of the ordinary. Since I am not, really, a big fan of the super-rich, here was my first thought when I saw the news story that contains the quote above: This is great! Let's hope that Jeff Bezos goes to the moon, personally, and stays up there!

As I say, I am not a big fan of the super-rich! I am definitely not a fan of Jeff Bezos, and I am not a fan of Elon Musk, either. Let's give Elon Musk some credit, though. When we start talking about grandiosity, Musk tops Bezos. Musk wants to go to Mars, not to the moon. The moon is so twentieth century!

Actually, I am prevaricating, a bit, in saying that my "first" thought, when I saw the Bezos' quote, was that it would be good if he went personally to the moon, and "stayed there." That was my second thought! My first thought was about Hannah Arendt and her Prologue in The Human Condition. It would be good to pay attention to what Arendt has to say, commenting on the success of Sputnik, which came before the United States sent men to the moon:

In 1957, an earth-born object made by man was launched into the universe, where for some weeks it circled the earth according to the same laws of gravitation that swing and keep in motion the celestial bodies—the sun, the moon, and the stars. To be sure, the man-made satellite was no moon or star, no heavenly body which could follow its circling path for a time span that to us mortals, bound by earthly time, lasts from eternity to eternity. Yet, for a time it managed to stay in the skies; it dwelt and moved in the proximity of the heavenly bodies as though it had been admitted tentatively to their sublime company.

This event, second in importance to no other, not even to the splitting of the atom, would have been greeted with unmitigated joy if it had not been for the uncomfortable military and political circumstances attending it. But, curiously enough, this joy was not triumphal; it was not pride or awe at the tremendousness of human power and mastery which thrilled the hearts of men, who now, when they looked up from the earth toward the skies, could behold there a thing of their own making. The immediate reaction, expressed on the spur of the moment, was relief about the first "step toward escape from men's imprisonment to the earth." And this strange statement, far from being the accidental slip of some American reporter, unwittingly echoed the extraordinary line which, more than twenty years ago, had been carved on the funeral obelisk for one of Russia's great scientists: "Mankind will not remain bound to the earth forever."

Such feelings have been commonplace for some time. They show that men everywhere are by no means slow to catch up and adjust to scientific discoveries and technical developments, but that, on the contrary, they have outsped them by decades. Here, as in other respects, science has realized and affirmed what men anticipated in dreams that were neither wild nor idle. What is new is only that one of this country's most respectable newspapers finally brought to its front page what up to then had been buried in the highly non-respectable literature of science fiction (to which, unfortunately, nobody yet has paid the attention it deserves as a vehicle of mass sentiments and mass desires). The banality of the statement should not make us overlook how extraordinary in fact it was; for although Christians have spoken of the earth as a vale of tears and philosophers have looked upon their body as a prison of mind or soul, nobody in the history of mankind has ever conceived of the earth as a prison for men's bodies or shown such eagerness to go literally from here to the moon. Should the emancipation and secularization of the modern age, which began with a turning-away, not necessarily from God, but from a god who was the Father of men in heaven, end with an even more fateful repudiation of an Earth who was the Mother of all living creatures under the sky?

The earth is the very quintessence of the human condition, and earthly nature, for all we know, may be unique in the universe in providing human beings with a habitat in which they can move and breathe without effort and without artifice. The human artifice of the world separates human existence from all mere animal environment, but life itself is outside this artificial world, and through life man remains related to all other living organisms. For some time now, a great many scientific endeavors have been directed toward making life also "artificial," toward cutting the last tie through which even man belongs among the children of nature. It is the same desire to escape from imprisonment to the earth that is manifest in the attempt to create life in the test tube, in the desire to mix "frozen germ plasm from people of demonstrated ability under the microscope to produce superior human beings" and "to alter [their] size, shape and function"; and the wish to escape the human condition, I suspect, also underlies the hope to extend man's life-span far beyond the hundred-year limit.

This future man, whom the scientists tell us they will produce in no more than a hundred years, seems to be possessed by a rebellion against human existence as it has been given, a free gift from nowhere (secularly speaking), which he wishes to exchange, as it were, for something he has made himself (emphasis added).

Going to the moon? Living there? Going to Mars? Living there? What the scientists tell us, in their most recent reports, is that we have set in motion an escalating process of global warming that puts all life on Earth in peril of extinction. That definitely includes our own lives. Without an Earth to come back to, going to the moon, or to Mars, is to deny everything that is true about our human existence, which is what Arendt so profoundly points out, above.

We have very little time to save ourselves. That is what the scientists are telling us. Every effort to escape the truth of our existence (efforts to go to the moon, for instance, or to Mars) makes it ever more likely that we will fail to halt the human-caused processes that are threatening life on Earth.