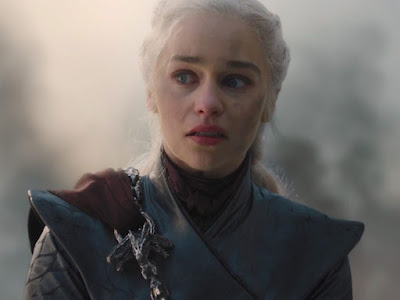 I generally put my daily blog postings online during the morning. This blog posting, thus, antedates the final episode of Game of Thrones, scheduled to appear tonight on HBO. I make no predictions. I have no idea how it will all end.

I do have a comment, though, about what many thought was the "unexpected" behavior of Daenerys Targaryen, as portrayed in the last and next-to-final episode. GoT followers will not need to be reminded that this "good Queen" used her last dragon to destroy the entirety of Kings Landing, frying both friend, foe, and the innocent alike.

Some were surprised. They thought this kind of behavior incongruous, considering the rather "positive" role that Daenerys has seemed largely to play throughout the long and engrossing series. I think Leslie Lee, writing in the Truthdig newsletter, was right on target. He calls GoT "An American Parable."

Here is a quick summary of Lee's perspective (emphasis added):

Daenerys was never really anyone’s hero. During the penultimate episode of the show’s final season, fans were shocked when Daenerys commanded her dragon to slaughter the people of King’s Landing, home of her rival, Queen Cersei Lannister, torching men, women and children as they ran for cover—this after the Lannister army and its allies had declared their surrender. It was an act of brutality that turned the fantasy universe of “Game of Thrones” into one of pure horror.

Dany devotees were apoplectic. They argued that such actions were completely aberrant, that their proud and noble queen would never harm innocent civilians. More than 400,000 have signed a change.org petition demanding that HBO remake the final season with “competent writers.” As blogger Candace Aiston wrote, “I’m so [expletive] mad right now. Game of Thrones has been a waste of my life.”

But was this really a break in character? Or did Daenerys fans ... just have her wrong from the start?

From the lore surrounding Dany’s father, the “Mad King,” to the boorish Robert Baratheon to the incestuous Cersei to the ruthless Stannis and lecherous Walder Frey, nearly every feudal ruler in “Game of Thrones” is portrayed as despicable in one way or another. The various plots they participate in to gain or keep power usually result in the deaths of their friends, their families and themselves, along with untold scores of serfs who fight and die in their wars.

Daenerys was never an exception to the rule. Television viewers may have embraced her as a feminist hero, comparing her to such real-life politicians as [Elizabeth] Warren and Hillary Clinton, but throughout the series she was as vengeful, vindictive and cruel as any lord. Here are just a few of the victims of Daenerys’ royal wrath:

These are far from the only people Daenerys gleefully tortured to death throughout the show, so her actions in the most recent episode should have come as no surprise.

Lee makes the point in his article that I made to my wife, as she complained that the last episode was not consistent with the trajectory of the series, and thus was unsatisfying as a way to bring the series to a conclusion. She saw this as a kind of literary failure.

Here is the point I made, and that Lee makes: Kings and Queens and comparable rulers are always tyrannical, and they act always in their own interest, and at their own whim. No one should ever expect such a ruler to act on behalf of the people over whom they rule. Anytime it seems like an autocratic leader is working for "the people," you had better believe that things are not as they appear.

Lee says that democratically-elected leaders are the only ones upon whom we can ever hope to rely. In this series, Jon Snow is the closest thing going.

Let's see if autocracy or democracy wins on Game of Thrones. Tune in tonight!