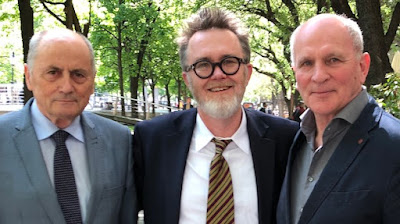 Rod Dreher, pictured above (in the center), writes a blog for The American Conservative. Dreher is not only politically conservative; he is strongly religious, favoring a retreat into small monastic communities, which he calls "The Benedict Option." His book by that name, just linked, is subtitled, "A strategy for Christians in a Post-Christian Nation."


I started following Dreher's blog after reading a New Yorker article about him that was titled, "Rod Dreher's Monastic Vision." In a blog posting made on May 3, 2019, Dreher announced a new book, which he is still writing, to be called (maybe), "Rules For Everyday Rebels: Twenty Lessons In Resisting The Cultural Revolution." He is not talking about China.

Dreher says that "the gist of his new book will be twofold: first, to explore evidence that emigres to the West from the Soviet bloc say tells them that Western democracies are sliding into soft totalitarianism; and second, to investigate practical strategies for resisting this soft totalitarianism from the lives and stories of Soviet bloc men and women who endured hard totalitarianism without losing their minds, their integrity, or their hope ... The most important thing I’ve learned from talking to the underground church community in Slovakia is the absolutely critical importance of small, strong communities."

I am not a fan of Dreher's politics, but I have found many of his observations to be quite worthwhile. The suggestion that the United States is falling into a "soft totalitarianism" hits pretty close to the mark, it seems to me. The need to maintain "small, strong communities" as the best antidote to such totalitarian tendencies also seems correct, the way I see it.

Luckily (though we do tend to forget it), our nation is not a "unitary" nation with all governmental power centralized in our national government. We are the "United" States, and the states come first, before the nation. It is this federal system that Hannah Arendt identified as one of our greatest bulwarks against totalitarianism, and she is certainly right about that, whether such threatened totalitarianism is either "hard" or "soft."

If we have cause to be worried about totalitarianism (and I think we do), I suggest that Dreher's commentary contains a good idea. Instead of simply agonizing over how bad things are becoming at the national level, let's focus on exercising our considerable political power through our personal engagement and involvement in local government activity.

A retreat to a monastery is not required!