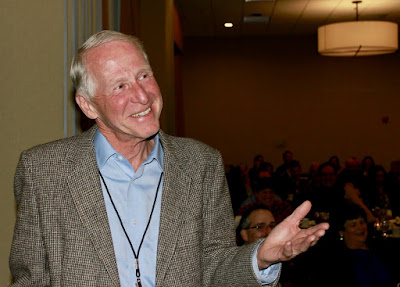 Pat McCormick (pictured), has recently retired as the Executive Officer of the Santa Cruz County Local Agency Formation Commission, commonly called LAFCO. An exceptionally nice celebration of Pat's thirty-eight years of service was held during the regular LAFCO meeting on May 1, 2019.

You can check the Santa Cruz County LAFCO website next month, to see what the Minutes say about that May 1st meeting. Those Minutes may be a bit longer than usual! The Board of Supervisors Chambers in the Santa Cruz County Governmental Center were packed, with people having come from all over California to voice their appreciation for the contributions that Pat McCormick has made to good land use planning and good government. Pat has had an impact not only locally but literally throughout the entire state - and he got nothing but well-deserved rave reviews from everyone who showed up to salute his contributions.

Most of the folks in the room, of course, were from Santa Cruz County, and they hailed from deep in the Fifth Supervisorial District to the precincts of the Pajaro Valley, down south in the Fourth Supervisorial District. Former Second District Supervisor Robley Levy was there, and made exceptionally heartfelt remarks about how Pat and LAFCO had helped save South County agriculture. Current Second District County Supervisor Zach Friend commended Pat for his professionalism. First District Supervisor John Leopold joined in the chorus of those celebrating Pat's contributions, and though I no longer have a formal role representing the Third Supervisorial District, I also testified to the incredibly important work that Pat has done to preserve and protect all that is best in Santa Cruz County. All districts covered, in other words!

LAFCO is a little-known and little-understood agency established by state law, one major purpose of which is to "stop sprawl." As expressed more formally in the Cortese–Knox–Hertzberg Local Government Reorganization Act of 2000, which is the most recent edition of this incredibly important state law, which was initially enacted in the 1960's, the purpose of LAFCO is to "encourage orderly growth and development which are essential to the social, fiscal, and economic well-being of the state."

I have seen the power of LAFCO up close and personal, having served on our local LAFCO for many years, representing the Santa Cruz County Board of Supervisors, and having served, also, as a Member of the CALAFCO Board of Directors. Without a doubt, LAFCO has prevented the kind of urban sprawl in Santa Cruz County that turned Santa Clara County from orchards and farms, the "Valley of Heart's Delight," into the Silicon Valley we know today. Santa Cruz County made a different choice, which I think was the right one, and it wouldn't have been possible without LAFCO and Pat McCormick.

The tributes to Pat documented his encyclopedic knowledge of LAFCO law, and of all other laws relating to California local government. He was thanked for his personal generosity, and celebrated for his ability effortlessly to marshal knowledge of arcane provisions of state law. In this, Pat typically relied not only on his personal memory, always at the ready, but also on the multiple pieces of paper, or digital files, that Pat was always able to produce at almost a moment's notice. Pat's ability to work with everyone, right in the midst of extremely flammable political controversies, was emphasized by almost everyone who testified.

As earlier indicated, I joined in the long line of those who thanked Pat McCormick for his work, and I thought I should document, here, my deep appreciation for Pat's service to both Santa Cruz County and to the State of California. As I was leaving the podium, Pat jokingly asked me why I hadn't made any reference to the most recently-named Nobel Laureate in Literature (a certain Mr. Bob Dylan, for those not quite up to speed on the actions of the Swedish Academy). Pat was obviously aware of my appreciation of Bob Dylan's insightful lyrics and moving music, and the thought came to me that I really should end this blog-based tribute with some sort of Dylan reference.

Since one of the persons appearing at the May 1st meeting quoted some song lyrics that Pat had written himself, it strikes me that a few lyrical licks, right here, using some Dylan-inspired music for the tune, is probably in order. Thus, I invite you to sing along with this single-verse song, to get some idea of Pat McCormick's contributions to Santa Cruz County. (The lyrics are intended to be sung to the tune of "Up To Me"):

Everything was going from bad to worse

Developers were making the call.

The future of the county was up for grabs

And it was looking like a lot of sprawl.

Somebody said, they said it with a laugh,

There had to be a different way.

This LAFCO guy, his name was Pat,


Many thanks to Pat McCormick. And there is another Dylan song that also comes to mind: