According to Foreign Affairs, modern warfare is more and more taking on the aspects of sci-fi. What follows is an excerpt from an article published in the May/June 2019 issue, "The New Revolution in Military Affairs."

In 1898, a Polish banker and self-taught military expert named Jan Bloch published The Future of War, the culmination of his long obsession with the impact of modern technology on warfare...

What Bloch anticipated has come to be known as a “revolution in military affairs”—the emergence of technologies so disruptive that they overtake existing military concepts and capabilities and necessitate a rethinking of how, with what, and by whom war is waged. Such a revolution is unfolding today. Artificial intelligence, autonomous systems, ubiquitous sensors, advanced manufacturing, and quantum science will transform warfare as radically as the technologies that consumed Bloch. And yet the U.S. government’s thinking about how to employ these new technologies is not keeping pace with their development.

This is especially troubling because Washington has been voicing the same need for change, and failing to deliver it, ever since officials at the U.S. Department of Defense first warned of a coming “military-technical revolution,” in 1992. That purported revolution had its origins in what Soviet military planners termed “the reconnaissance-strike complex” in the 1980s, and since then, it has been called “network-centric warfare” during the 1990s, “transformation” by U.S. Secretary of Defense Donald Rumsfeld in these pages in 2002, and “the third offset strategy” by Deputy Secretary of Defense Robert Work in 2014. But the basic idea has remained the same: emerging technologies will enable new battle networks of sensors and shooters to rapidly accelerate the process of detecting, targeting, and striking threats, what the military calls the “kill chain.”

The idea of a future military revolution became discredited amid nearly two decades of war after 2001 and has been further damaged by reductions in defense spending since 2011. But along the way, the United States has also squandered hundreds of billions of dollars trying to modernize in the wrong ways. Instead of thinking systematically about buying faster, more effective kill chains that could be built now, Washington poured money into newer versions of old military platforms and prayed for technological miracles to come (which often became acquisition debacles when those miracles did not materialize). The result is that U.S. battle networks are not nearly as fast or effective as they have appeared while the United States has been fighting lesser opponents for almost three decades (emphasis added).

That "kill chain" terminology was new to me. However, it all makes sense. If the idea is to kill people, finding the best and cheapest way to do that seems like the only "rational" thing to do. However, maybe the indubitable logic of this proposition could prompt some further reflection on the "kill chain" concept.

In the very first paragraph of the article I have excerpted above, you will see an elipsis. Here is what I left out:

Bloch foresaw with stunning prescience how smokeless gunpowder, improved rifles, and other emerging technologies would overturn contemporary thinking about the character and conduct of war. (Bloch also got one major thing wrong: he thought the sheer carnage of modern combat would be so horrific that war would “become impossible.”)

We know that "anything is possible" in the world that we create through our own actions and choices. We can make both our dreams and our nightmares come true. The question that always faces us, including the question of what to do about potential military applications of our latest scientific advances, is not "what will happen now?" but "what should we do?"

Bloch had the right idea. When war becomes so horrific that it is unbearable to contemplate the possibilities, we need to make it "impossible." Otherwise, we are looking at a super-efficient "kill chain" that will bind us all into a race towards total destruction: 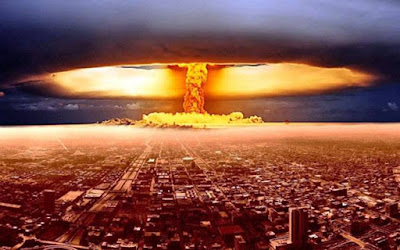