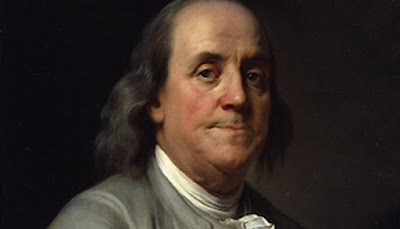 Quartz is a business news website. It sends out bulletins, from time to time, and many of these contain helpful information. I am on one of the Quartz bulletin lists. Full disclosure: I am on LOTS of lists!

Recently, I got a "Quartz Obsession" advisory that told me something I didn't know. Apparently, it was Ben Franklin who first made an astute psychological observation that has not only withstood the test of time but that has actually been validated by modern scientists:

Asking someone for a favor, even a small one, makes them like you more.


I had never really thought about the fact that asking people for help and assistance could be a "technique" for getting people to like you, but upon reading the advisory from Quartz I immediately recognized the wisdom of this advice. I do know it works! As a candidate, I went door to door asking people for their votes. Let me assure you that when a candidate does that, and makes a personal request that a voter favor the candidate with his or her vote, you can track the difference by precinct.

Ben Franklin definitely got it right, and I am somewhat embarassed to realize that "the Ben Franklin effect" is commonly discussed, in lots of different contexts.

Franklin's observation is also, as it now strikes me, the basis for some of the very best advice I ever received from my father. When you would like someone to do something for you, he said, you always say, "would you be willing to....."

Almost always, using that phrasing that will get you a better response than some other approach. You're asking for a favor. People want to be nice. They feel good that you have given them an opportunity to prove they are. They end up liking you for it.

Thanks to Quartz, I now have a new reason to revere Ben Franklin. His work in helping to draft the United States Constitution is another one!