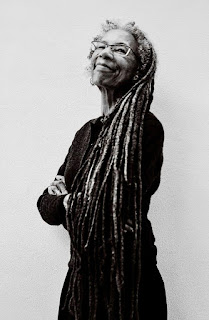 Ruth Wilson Gilmore, pictured, has been advocating the abolition of prisons for the last thirty years. Gilmore is the Director of the Center for Place, Culture, and Politics and professor of geography in Earth and Environmental Sciences at The City University of New York.

I was stunned by a description of Gilmore's meeting with a group of young people in California's Central Valley that took place at a conference held in Fresno, California, in 2003. The description of this encounter comes from an April 21, 2019, article in The New York Times. In case there is a paywall problem, the article is also available here.

As Gilmore was preparing her remarks on prison abolition, she was confronted by a group of middle school students who challenged the message she had not, yet, actually delivered:

The children were primarily Latino, many of them the sons and daughters of farmworkers or other people in the agriculture industry. They ranged in age, but most were middle schoolers: old enough to have strong opinions and to distrust adults. They were frowning at her with their shoulders up and their arms crossed.

She didn’t know these kids, but she understood that they were against her. “What’s going on?” she asked.

But why, they asked. And before she could answer, one said, “But what about the people who do something seriously wrong?” Others chimed in. “What about people who hurt other people?” “What about if someone kills someone?”

Whether from tiny farm towns or from public housing around Fresno and Bakersfield, these children, it was obvious to Gilmore, understood innately the harshness of the world and were not going to be easily persuaded.

“I get where you’re coming from,” she said. “But how about this: Instead of asking whether anyone should be locked up or go free, why don’t we think about why we solve problems by repeating the kind of behavior that brought us the problem in the first place?” She was asking them to consider why, as a society, we would choose to model cruelty and vengeance.

As she spoke, she felt the kids icing her out, as if she were a new teacher who had come to proffer some bogus argument and tell them it was for their own good. But Gilmore pressed on, determined. She told them that in Spain, where it’s really quite rare for one person to kill another, the average time you might serve for murdering someone is seven years.

“What? Seven years!” The kids were in such disbelief about a seven-year sentence for murder that they relaxed a little bit. They could be outraged about that, instead of about Gilmore’s ideas.

Gilmore told them that in the unusual event that someone in Spain thinks he is going to solve a problem by killing another person, the response is that the person loses seven years of his life to think about what he has done, and to figure out how to live when released. “What this policy tells me,” she said, “is that where life is precious, life is precious.”

At the end of the day, the kids made a presentation to the broader conference, announcing, to Gilmore’s surprise, that in their workshop they had come to the conclusion that there were three environmental hazards that affected their lives most pressingly as children growing up in the Central Valley. Those hazards were pesticides, the police and prisons.

I have to say that the students clearly "got it." Pesticides, police, and prisons can all be problematic in a community that is trying to live by the lesson that Gilmore taught: