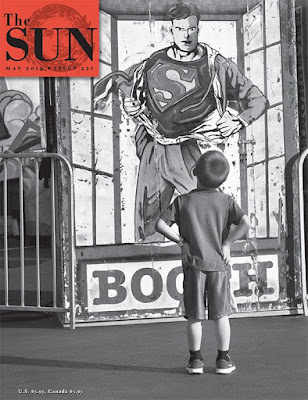 I pretty much like everything about The Sun magazine; however, I particularly appreciate its "One Nation, Indivisible" section. This is a column that reproduces items from The Sun's archives that the editors believe "speak to the current political moment."

About twenty years ago, I attended a lecture by a Harvard professor who talked about how corporations operate like modern-day kingdoms. At one time, she said, people believed kings ruled by divine right, and today we seem to believe the same thing about corporations. Toward the end, she asked, “Do you know what it is that allowed people to let go of, overcome, and reject the notion of the divine right of kings?” I held my breath and got ready to take some notes. Her answer: “They just stopped believing in it.”

The Sun: You’ve said that the true political spectrum is top to bottom, not right to left.

Jim Hightower: Right and Left, conservative and liberal are theoretical divisions. Top to bottom, however, is the reality in which people actually live.

The Sun: Where does that put wealthy or upper-middle-class liberals?