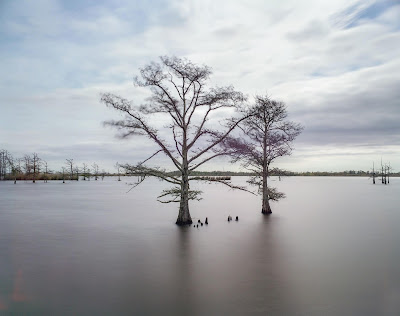 Click this link to read "Under Water," Elizabeth Kolbert's requiem for New Orleans. Clicking the link should take you to her article in the April 1, 2019, edition of The New Yorker.

In the end, it seems to me, Kolbert's article is not just about flooding in New Orleans, and about its eventual demise. One definition of the term "underwater," used most typically to describe the value of a financial asset, is this one: "an asset without actual value."

One wonders whether human civilization, in its entirety, as I think Kolbert intimates, isn't actually facing the same situation as New Orleans:

Through activities like farming, mining, and clear-cutting, people have directly transformed more than half the ice-free land on Earth—some twenty-seven million square miles—and we’ve indirectly altered half of what remains. As with the Mississippi, we have dammed or leveed most of the world’s major rivers. Our fertilizer plants and legume crops fix more nitrogen than all terrestrial ecosystems combined, and our planes, cars, and power stations emit about a hundred times more carbon dioxide than volcanoes. We now routinely cause earthquakes. (A particularly damaging human-induced quake that shook Pawnee, Oklahoma, on the morning of September 3, 2016, was felt all the way in Des Moines.)

In terms of sheer biomass, the numbers are stark-staring: today, people outweigh wild mammals by a ratio of more than eight to one. Add in the weight of our domesticated animals—mostly cows and pigs—and that ratio climbs to twenty-three to one. “In fact,” as a recent paper in the Proceedings of the National Academy of Sciences observed, “humans and livestock outweigh all vertebrates combined, with the exception of fish.” We have become the major driver of extinction and also, probably, of speciation. In the age of man, there is nowhere to go—and this includes the deepest trenches of the oceans and the middle of the Antarctic ice sheet—that does not already bear our Friday-like footprints.

Atmospheric warming, ocean warming, ocean acidification, sea-level rise, deglaciation, desertification, eutrophication—these are just some of the byproducts of our species’ success. Such is the pace of what is blandly labelled “global change” that there are only a handful of comparable examples in Earth’s history, the most recent being the asteroid impact that ended the reign of the dinosaurs, sixty-six million years ago. Humans are producing no-analogue climates, no-analogue ecosystems, a whole no-analogue future. At this point, it might be prudent to scale back our commitments and reduce our impacts. But there are so many of us—nearly eight billion—and we are stepped in so far, return seems impracticable.