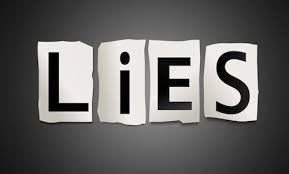 On April 16, 2019, The New York Times ran a column by David Brooks. Brooks' column was headlined: "Five Lies Our Culture Tells Us." I encourage you to read the column in its entirety. However, to cut to the chase, let me list those "Five Lies" identified in the column:

Lie #1 - Career success is fulfilling. This is the lie we foist on the young.

Lie #2 - I can make myself happy. This is the lie of self-sufficiency.

Lie #3 - Life is an individual journey. This is [a] lie [that] encourages people to believe freedom is the absence of restraint.

Lie #4 - You have to find your own truth. This is the privatization of meaning.

The common denominator in this list, the way I see it, is that the "individual" should be seen, ultimately, as the most important thing. That is the basic, foundational "lie," or "misapprehension," to be a bit more charitable about it, that has generated the adverse social, political, economic, and cultural impacts that Brooks deplores.

However, we are not only individuals. We are also, and inevitably, "together in this life." When we forget this, we build our society upon "lies," as Brooks calls them. I do think that "misapprehension" would be a preferable term, because thinking that the individual is the ultimate measure of all things is a misunderstanding of our real status in the world. Misidentifying what is "real" and what is not can have dire consequences. We are seeing such consequences today, and the "individualism" that some equate to freedom is bringing us to a collective failure that threatens us not only collectively, but individually as well.