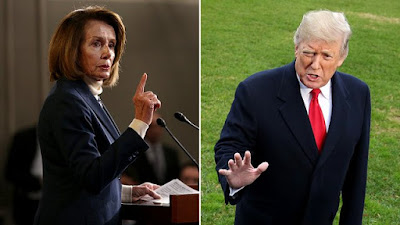 The picture collage above comes from a January 25, 2019, opinion column by Shamila N. Chaudhary, published in The Hill. The title of Chaudhary's column was "Partisan Squabbles Degrade Public Servants - At America's Risk."

I came upon the collage above after I started searching for images associated with the phrase "partisan squabbles." I did that after reading an opinion column published in The New York Times on April 13, 2019. That column, by Samara Klar, Yanna Krupnikov and John Barry Ryan, was titled, "Polarized Or Sick of Politics?" Here's the photo that was used in the online version of The Times' column, illustrating a group of people who are "sick of politics": 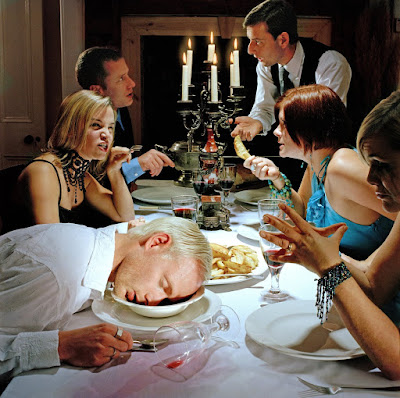 The political science professors who wrote for The Times reported on a series of experiments and surveys that they contend demonstrate that Americans are not, really, as "polarized" as we sometimes think. Rather, Americans just hate "politics." The "pull quote" that attracted my attention to the column proclaimed: "Most Americans just really don't like partisan squabbles." Again, according to the authors, that's not because Americans are so "partisan." It's because they just don't like the "squabbles" that seem to define what "politics" is all about.

I am not sure how convincing that set of surveys and experiements actually is. Read The Times' column for yourself and make up your own mind.

What I do think, though, is that the large number of Americans who make clear that they really don't like "politics" are voicing their complaints and concerns about something that is not what we really ought to call "politics," at all.

When "politics" is seen as a set of squabbles and manueverings between various elites who are  fighting about who gets to run the country, ordinary men and women have little reason to like it. "Politics" does become an arena in which "everything is possible and nothing is true." If politics is just deciding to whom one should show allegience, among the various "leaders" on offer, there really isn't much to like. It's no wonder that the "squabbles" between the candidates and the various ideologies being discussed are rejected as unworthy and distasteful.

But what if "politics" were actually understood to be what it actually is, the mechanism by which we decide for ourselves, as self-governing citizens, what we should do, collectively, to meet the challenges we face and to accomplish the hopes and aspirations we cherish?

The key to a right relationship to "politics," for me, is citizen engagement in the political process. We need to see ourselves (because it is true) as the actors who will determine the political choices and outcomes that will govern our present and future. If we see ourselves as mere "observers," as opposed to "actors," then the "partisan squabbles" of those who present themselves as the persons who are entitled to "act," will become very tiresome and distressing indeed. This is what politics has become, an entertainment, a spectator sport, and it is a hugely ignoble spectacle. Take our current president, as an example!

The idea that we (each of us) are part of a self-governing society is slipping away. If all we can do it to watch while others "squabble," it's no wonder that we hate politics.