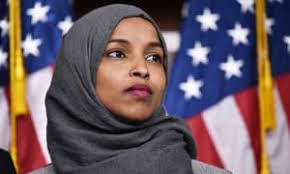 Illan Omar, pictured above, represents the Fifth District of Minnesota in the United States Congress. An article in Slate, dated April 13, 2019, contained these lines:

The attacks on Omar have been steady and insidious, and it’s more obvious now than ever what they’re based on. When Crenshaw and Trump connect her to 9/11, and when commentators on Fox News question whether she’s “American first” and suggest that her hijab indicates she doesn’t follow the U.S. Constitution, the religious bigotry is clear. It’s no longer possible to deny.

The article was written by Aymann Ismail, who is a Muslim and a United States citizen. Amazing as it may seem to some, he is both, and all at the very same time! Ismail doesn't mention the Korematsu case, but what is happening to Illan Omar and other Muslims is premised on the same kind of thinking that ended up sending Fred Korematsu and other persons of Japanese ancestry to government concentration camps during World War II.

It was just last year that the United States Supreme Court finally repudiated the Korematsu decision. Ironically, the Court did so in a decision, Trump v. Hawaii, that upheld President Trump's "Muslim ban."

We all need to be very clear, and we need to speak out very clearly. It is absolutely indefensible to judge individuals by their ethnic background or religious affiliation.

Here is what Ismail says:

He is so right!