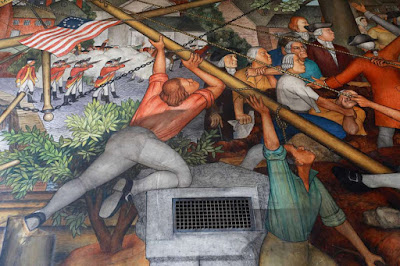 The New York Times reported on April 8, 2019, that the State of Michigan is debating whether or not the word "democracy" should be used in the written-down policies outlining the state's "learning standards in social studies."

These are standards that are intended to "guide what teachers of history, civics, economics and geography cover in their lesson plans." Heaven forbid that the state should be teaching that our American form of government is to be thought of as a "democracy." Much better to call it a "republic," according to those wanting to revise the use of "democracy" right out of existence.

Those pushing for an end to the use of the word "democracy" are also asking that the state's learning standards abandon any reference to "climate change," and Roe v. Wade, and to any mention of "gay and lesbian civil rights."

I guess we might call this approach to curriculum development the "Chinese method." The Times also reported, last Monday, that China has now published an application called "Study the Great Nation." It promotes Xi Jinping and the ruling Communist Party, as it informs citizens what they should know about Chinese history and government. It, too, is a set of "learning standards." Students with low "app scores" are not getting into the best schools!

Of course, Michigan is a benighted "Red State," and we all know that China is moving swiftly towards an ever more totalitarian government. Lest those living on the "Blue Coast" start trotting more quickly on the high horses they ride, however, consider what the San Francisco Chronicle reported, on the very same day that The New York Times published its article about Michigan school learning standards. As it happens, school officials in San Francisco are planning to paint over or remove the mural shown above, located at George Washington High School, because the officials don't want students to have to confront the history lessons it conveys.

The mural does depict both slavery and the oppression of Native Americans. Children aren't supposed to have to deal with that is the argument. At least to me, it seems that the argument in San Francisco is not that different from the argument in Michigan, though with a different political inclination leading to the effort to throttle down a possibly uncomfortable discussion. China, of course, doesn't just want to "throttle down" uncomfortable topics; they want to choke them to death!

I thought that 16-year old Alex Hosey, a sophomore student quoted in The Times' article, had the best quote, in any of these three news stories:

"Hiding our nation’s sins isn’t the right way to do it,” [Hosey] wrote in a letter to the State Board of Education. “Teach us about everything — the good and the bad, so we can learn to think for ourselves.” 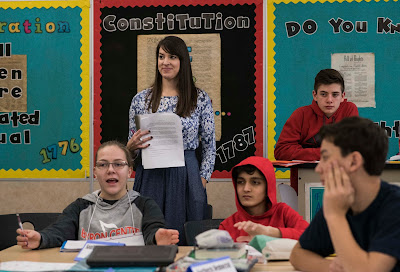