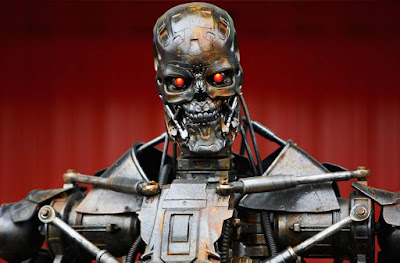 Are killer robots coming to take our jobs? This is the question addressed by economist Paul Krugman in his March 14, 2019 column in The New York Times.

In essence, Krugman says, the answer is "no." Robots are not coming to take our jobs. Krugman's column has a helpful definitionn of what a "robot" is, in economic terms, and he notes that the key feature is that a "robot" increases productivity. That isn't actually a problem. Increasing productivity is good. The problem is who gets the benefits of the increased productivity that "robots" provide. Krugman ends his column with this observation:

The decline of unions has made a huge difference. Consider the case of trucking, which used to be a good job but now pays a third less than it did in the 1970s, with terrible working conditions. What made the difference? De-unionization was a big part of the story.

And these easily quantifiable factors are just indicators of a sustained, across-the-board anti-worker bias in our politics.

Which brings me back to the question of why we’re talking so much about robots. The answer, I’d argue, is that it’s a diversionary tactic — a way to avoid facing up to the way our system is rigged against workers, similar to the way talk of a “skills gap” was a way to divert attention from bad policies that kept unemployment high.

And progressives, above all, shouldn’t fall for this facile fatalism. American workers can and should be getting a much better deal than they are. And to the extent that they aren’t, the fault lies not in our robots, but in our political leaders.

I think Krugman is right on target - but I do have one important objection to his formulation. I am really tired of the suggestion that what we need is better "leaders." What we need is to get more directly engaged, ourselves, in the political struggles that will determine not only the fate of the economy, but the fate of human civilization.

Hoping for better "leaders," and thinking that our political leaders have caused our grief, and that better leaders are going to solve our problems for us, just isn't going to work. At least that's my view. The power of the people needs to be more directly exercised if we expect to make any headway against the killer robots of the 1%.

As is so often the case, my friend Bob Dylan has some good advice (click the link for a tutorial):