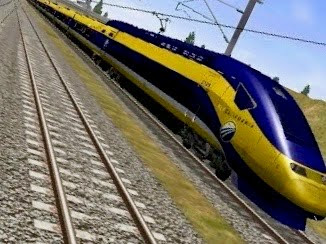 In his State of the State speech, delivered on February 12, 2019, Governor Gavin Newsom asked legislators to "level about high-speed rail." "Let's be real," the Governor said:

The project, as currently planned, would cost too much and take too long. There’s been too little oversight and not enough transparency. Right now, there simply isn’t a path to get from Sacramento to San Diego, let alone from San Francisco to L.A. I wish there were.

I thought that these remarks by Governor Newsom were right on target. What started out as a visionary possibility for California turned into an outrageous boondoggle, as the state's High-Speed Rail Authority, backed at every turn by former Governor Jerry Brown, ignored every reality the project confronted, economic, physical, legal, and political, and simply insisted that the idea was too good to abandon, even when the project ran into realities that made the original proposal impossible. Those in charge chose to ignore real problems, and to say they didn't exist, rather than to confront and overcome.

For one brief, shining moment, Governor Newsom appeared prepared to take a different (and the correct) approach. Here's what the Governor said:

Within hours, the Governor began to backtrack, and he has now put himself right where the former Governor put himself, advocating for things that just don't square with the legal, political, and physical realities that will ultimately determine the fate of high-speed rail in California.

Instead of taking his own admonition to heart, and "leveling" about high-speed rail, Governor Newsom has gone into "tilt" mode, and set himself up for a battle with reality (including the reality of the promises that California made to the federal government about money, many of which the state has failed to honor).

"Tilting at windmills?" Maybe not windmills in this case. More like "tilting at the train tracks."

A column by George Skelton, a reporter for the Los Angeles Times, outlines with perfect accuracy what has happened here. I am reproducing the column, in its entirety. If the word gets out, maybe Governor Newsom will rethink his position and get back to "level."

Gov. Gavin Newsom tripped on high-speed rail and fell flat. Then President Trump rode to the rescue and picked him up.

That’s how I read the latest California-Trump flap, this one over the state’s floundering bullet train project.

Only 36 percent of the state’s likely voters approved of the president’s job performance in a January poll by the Public Policy Institute of California.

State Attorney General Xavier Becerra is practically living off the guy politically. He has sued the Trump administration 46 times, raising his profile.

California Democrats and Trump feed off each other.

After Newsom delivered an excellent State of the State address last week and then mucked it up by essentially denying he said what he did, Trump was right there with a helping hand.

He makes almost any Democrat look good by comparison. And if anyone could restore the bullet train’s popularity in California, it would be Trump by ridiculing it, even if justified. It’s $44 billion over budget and 13 years behind schedule.

“Let’s be real,” Newsom said. “The project as planned would cost too much and take too long…. Right now there simply isn’t a path to get from … San Francisco to L.A…. However, we do have the capacity to complete a high-speed rail link between Merced and Bakersfield.”

“Look,” he added, “we will continue our regional projects north and south.” He was referring to environmental planning, electrifying a commuter line from San Jose to San Francisco and modernizing L.A.’s Union Station. “We’ll connect the revitalized Central Valley to other parts of the state and continue to push for more federal funding and private dollars.

“But let’s just get something done once and for all.”

No one I’ve talked to understands what then afflicted Newsom and his staff. His spokesman won’t try to explain. But they objected to the news coverage. Aides called reporters to “clarify” his speech. Chief of Staff Ann O’Leary tweeted, “Gov. Newsom fully committed to high-speed rail….”

Trump and Newsom then got into a ping-pong match on Twitter.

The president tweeted that “California has been forced to cancel the massive bullet train project after having spent and wasted many billions of dollars. They owe the federal government three and a half billion dollars. We want that money back now. Whole project is a ‘green’ disaster.”

Newsom tweeted back, calling Trump’s words “fake news” and proclaiming: “This is CA’s money…. We’re not giving it back.”

Two days after his speech, Newsom told Los Angeles Times reporter Taryn Luna that any confusion about his rail stance was the media’s fault.

“I just think people in the media should pause before they run headlines and actually consider the facts,” the governor said.

Newsom deserved and got rave reviews for his speech. Then he overreacted to the coverage and botched it. Aides should have advised him to chill out, but they either didn’t know enough to do that or were too timid.

On Monday, the president canceled $929 million in grants and announced he’ll try to seize an additional $2.5 billion. He made Newsom look like a heroic protector of California money.

“You’ve got to give the governor a mulligan,” says Republican consultant Mike Madrid, using a golf term for a second-chance shot. “Hopefully he is going to govern more like the guy who gave the speech than the guy who mopped up after it.”

Has Newsom been wounded?

“It doesn’t hurt him at all,” says Bob Shrum, a longtime Democratic strategist who is director of the Jesse M. Unruh Institute of Politics at USC.

“It only hurts if it becomes a pattern. He seems to be a smart guy. My guess is he’ll learn from this.”

Anyway, for almost two more years at least, there’ll be a helping hand in the White House to make this California governor look good by comparison.