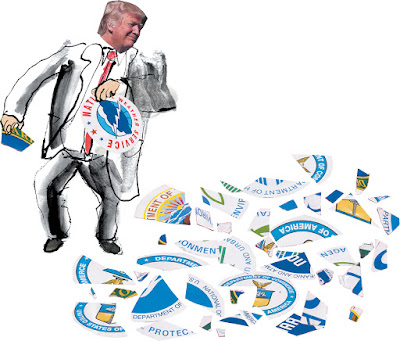 In a long review of The Fifth Risk, a book by Michael Lewis, Fintan O'Toole gave us this view of president Trump:

What’s going on here is easily enfolded within the terms that the big narratives of the Trump presidency offer us: chaos, ignorance, incompetence. The terms are not inapt, but they are radically insufficient.

We all know that people in power deploy distraction as a professional skill, much as magicians do. We are used to it. In every act of political communication, “Look at this” is always the explicit obverse of an implicit “Don’t look at that.” But Trump confounds us by using as distractions the very things that other politicians want to distract us from. In democracy as we think we have known it, the art of governance is, in part, the skill with which our attention is diverted from the sordid, the shameful, the thuggish. Yet these same qualities are the gaudiest floats in Trump’s daily parade of grotesqueries. This is his strange, and in its own way brilliant, reversal: instead of distracting us from the lurid and the sensational, Trump is using them to distract us from the slow, boring, apparently mundane but deeply insidious sabotaging of government. He is the blaring noise that drowns out the low signal of subversion.


The O'Toole review is worth reading in its entirety. O'Toole is saying that while our president may appear to be, he actually is not, either a buffoon or an incompetent. Quite the contrary. The president is the political equivalent of a criminal mastermind, a modern day Moriarty, disguising his real intentions, and presenting himself as a buffoon and an incompetent in order to do so.

What, then, is the president actually about? O'Toole, basing his analysis on the new book by Michael Lewis,  says that the president's project is to destroy the policy and administrative capabilities of the federal government. That is his real ambition. Our president, in other words, is a saboteur.

I have to say, that sounds about right to me!