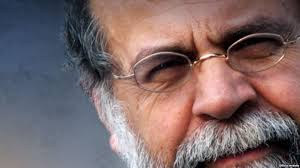 Hamid Dabashi, pictured above, is the Hagop Kevorkian Professor of Iranian Studies and Comparative Literature at Columbia University in New York. In a recent article in Counterpunch,  Lawrence Davidson introduced Dabashi as follows:

The Columbia University professor Hamid Dabashi challenges the widespread assumption that “the American soul is something quintessentially good and even noble.” He goes on to point out that most of those who hold this view also believe that President Donald Trump and his policies and practices cannot possibly be representative of real American values.

Dabashi’s position is that both of these idealistic beliefs are nothing but ahistorical delusions. “We may, in fact, be hard pressed to find a single moment in American history when hateful racism, sexism, militarism, and xenophobia have not been entirely definitive to this American soul.” In addition, “those who view President Donald Trump as unrepresentative of American values are wrong.” In Dabashi’s view this president’s policies and practices are indeed who we are.

The Counterpunch article was titled, "Just How Corrupt is the American Soul?" It looks, from the Davidson article, that Dabashi would probably suggest that there is no effective bottom to this corruption. Davidson is a bit kinder, but is still rather critical. It is always good to hear from the critics!

When the word "soul" starts getting used in discussions about politics, I can't help but remember two different things. First, I remember that the United States Constitution suggests rather forcefully that mixing religon and politics is simply not permitted. Trying to talk about political failure and political reform in terms of the "soul" of a nation is inherently problematic.

Second, I remember my training at Union Theological Seminary in New York City during the 1970-1971 academic year. While Union is non-denominational, it was then, and still is, an institution that is centered on the study of theology from a Protestant Christian perspective.

From that perspective, if I properly understood my theology classes, it is absolutely clear that all human souls are profoundly and insistently "corrupt." And the nations that humans build are, too.

Christian theology does contend (and I think it is not just Christian theology that does so) that even the most corrupt soul can be "redeemed" and can be "saved." And nations can be redeemed, too; I'm sure of that.

The way I see it, the question for us is not, really, "how corrupt is the American soul?" We can stipulate to the answer to that. It's corrupt - just like the souls of all the other nations of the Earth.

The question for us, the way I see it, is how will we redeem and cleanse the soul of America? I am suggesting that we can do it. I did learn in my theology classes that redemption is available to us all, and always, as long as we still live.

We can redeem the soul of America, no matter how corrupt it is, and that must be our object. But we cannot do that, obviously, if we refuse to admit that the soul of America needs redemption! And that is why we need to hear from the critics!