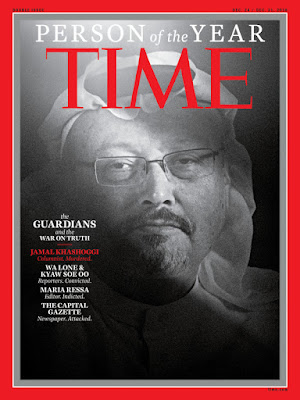 Each year, the last edition of Time magazine published during that year features its annual "Person of the Year" article. This year, the last edition of Time is dated December 24 / December 31. A picture of Jamal Khashoggi, a political columnist for The Washington Post, has been placed on one of its several alternative covers. Khashoggi was murdered on October 2, 2018, in the Saudi Embassy in Istanbul. His body was then dismembered and removed from the Embassy. The horrific nature of this assassination has been well covered in the news, but as it turns out, Khashoggi is not the only journalist who was murdered this year.

Time lists fifty-two journalists who have either been murdered during 2018, or who have lost their lives covering the various wars raging around the world. Time calls these journalists "The Guardians," and honors them in its annual issue.

You can read their stories here. Very much worthy of honor they are!