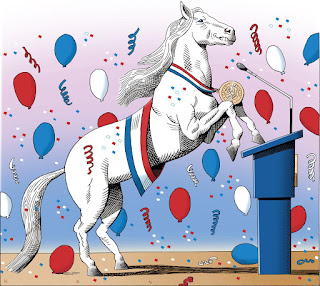 Peggy Noonan was a speechwriter for Ronald Reagan. Now, she writes for The Wall Street Journal, and her latest column is titled, "A Magic Pony Is the Wrong Horse to Back."

Noonan's point is that our national politics, increasingly, reflects a desperate hope that there is someone out there, some sort of political magician, if we can just identify that person, who can "Make America Great Again," to pick a phrase not quite at random.

Noonan, citing to an interview with former New Jersey Governor Chris Christie, says that too many of us agree with Christie, and seem to think that politics is a feeling. Noonan doesn't agree.

Politics, says Noonan, is (or should be) "about thought and judgment. Sober judgment, serious accomplishment, deep knowledge and personal maturity are most important in our political leaders, because of the complexity of the problems we face. History will be confounded that at such a crucial time, trying to come up with a plan to address such issues as artificial intelligence and robotics and the future of work and a rising China and the stresses of the nuclear world, we kept choosing magic ponies and hoping for the best."

Noonan names Beto O'Rourke as a potential "magic pony" on the left. I bet she might put Kamala Harris' name in the same category, though she doesn't actually name her in the column. And how about our favorite billionaire from the progressive side, Tom Steyer? On the Democratic Party side, heading into the presidential elections in 2020, there seem to be a lot of "magic pony" candidates clamoring for attention. And then we've got the Republican Party side. Not so many "magic ponies" in evidence there, but there is certainly one big "magic ass," if I can be forgiven for so denominating our current president.

If you buy into Noonan's analysis, the Democrats should be looking at candidates like California Governor Jerry Brown and Vermont Senator Bernie Sanders. Maybe Sherrod Brown, Senator from Ohio, should make the list, too. And how about Minnestota Senator Amy Klobuchar?

I do think that Noonan is on to something important about our contemporary politics, which is why I am recommending her column. It is a pretty quick read.

In my way of thinking, "magic pony" politics derives from a fault not in our stars, but in ourselves. We have failed truly to internalize the idea of "self-government," and to realize that our office holders are to represent us, and work for us, this diverse and fallible set of human beings we call "the nation." Office holders are "under" not "above" us, and because they are our subordinantes, if they fail, it is we who are responsible. This way of looking at politics means that we need to cling tightly to the realization that our government must be "of" the people, and "by" the people, not merely "for" the people.

We keep looking for that "magic pony" politician who will do things "for us," so we can forget about the whole distasteful business of government.

That's the problem. That's why we keep looking for those "magic ponies."