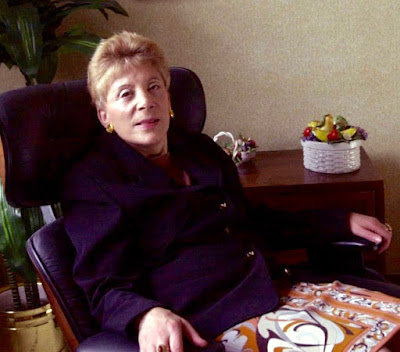 As I say, I had never heard of Evelyn Y. Davis until I read her Wall Street Journal obituary. Maybe you have never heard of her, either. She was, apparently, well known in some circles as a person who attended shareholders' meetings of a lot of different companies, often doing somethng dramatic to call attention to herself. Davis called herself “the Queen of the Corporate Jungle," according to The Wall Street Journal, and would do almost anything to attract attention. What was Davis' objective in making all these appearances at shareholders' meetings? "Discussing her goals with People magazine in 1996, she confided: 'The main thing is to keep my name out in front.'"

As we know (I am talking about president Trump), narcissistic, attention-seeking flamboyance can become dangerous to the public health, safety, and welfare. That happens when the Trump/Davis disease afflicts persons who are in positions of genuine responsibility. Luckily for corporate America, Davis was never in such a position, at least as far as I can tell. This did not keep her, of course, from evaluating her own achievements in the most flattering light, and claiming to have great "power."

Below is a picture of Davis' three-tablet, memorial tombstone, which she designed in advance of her death. If you want to see a larger, and more readable version, you can click this link. 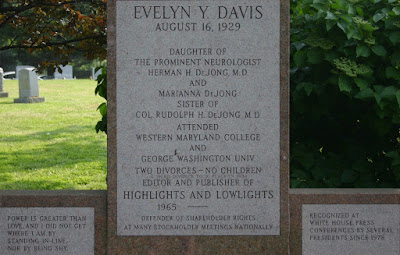 The tablet on the left reads as follows: "Power is greater than love, and I did not get where I am by standing in line nor by being shy."

As an advisory to the living, the irony of this pronouncement on a tombstone could hardly be greater. Evelyn Y. Davis did not get buried in the ground by standing in line, nor by being shy. But those who did stand in line, and who were shy, are buried in the ground all around her. Death is our common fate, and in the end, those who pursue "power" or "publicity" in this life, as differentiated from those who manifest "love" for others, are equally found down under the ground. What is left behind, after we are gone, are the memories of us that remain, that others hold in their hearts and minds.

I didn't know Evelyn Y. Davis, but I do have some postmortem sympathy and compassion for someone who was, I gather, just about as obnoxious as our current president, though posing a lot less danger to herself and others.

Bob Dylan, as is so often the case, has some appropriate words:


Carl Sandburg also has written some words worth remembering:

Give me hunger,
O you gods that sit and give
The world its orders.
Give me hunger, pain and want,
Shut me out with shame and failure
From your doors of gold and fame,
Give me your shabbiest, weariest hunger!

But leave me a little love,
A voice to speak to me in the day end,
A hand to touch me in the dark room
Breaking the long loneliness.
In the dusk of day-shapes
Blurring the sunset,
One little wandering, western star
Thrust out from the changing shores of shadow.
Let me go to the window,
Watch there the day-shapes of dusk
And wait and know the coming
Of a little love.

I fear that Evelyn Y. Davis may have had a rather sad and lonely life, granting that she may not have seen it that way herself. I fear that she may have missed that "little love" that makes this life worthwhile, though she may never have even noticed.

I want a different tombstone when I go down.