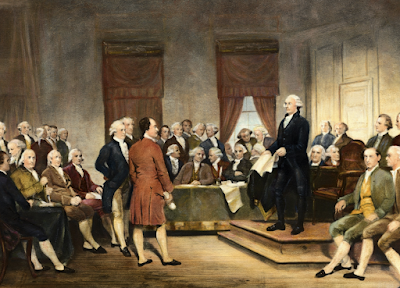 "Originalism" is a doctrine of Constitutional interpretation, often identified with former United States Supreme Court Justice Antonin Scalia. The idea of "originalism" is that there is "an identifiable original intent or original meaning, contemporaneous with the ratification of a constitution or statute, which should govern its subsequent interpretation."

That seems like a plausible way to think about how to interpret the Constitution. Let's look to the intent expressed in the words of the document.

In recent times, the Supreme Court has tended to put forward "originalist" arguments in favor of its profoundly conservative decisions. Erwin Chemerinsky, the founding Dean of the University of California, Irvine School of Law and now Dean of the University of California, Berkeley School of Law, says "It’s Time for a Progressive Reading of the Constitution." He makes a good case that the so-called "originalist" decisions aren't reflecting the Constitution's original intent at all, and urges us to develop a "progressive reading."

Among other things, Chemerinsky notes that any genuine "originalism" would admit that the words of the Constitution ought to be understood and interpreted according to the intent of the Framers, as that intent is found within the document itself. Thus, Chemerinsky says:

The document should be interpreted to fulfill its central values. Therefore, it is essential to begin by identifying the core underlying values that the Constitution is meant to achieve. The place to start is at the very beginning, with the Preamble, which articulates the purposes for the document. The Preamble states: “We the People of the United States, in Order to form a more perfect Union, establish Justice, insure domestic Tranquility, provide for the common defence, promote the general Welfare, and secure the Blessings of Liberty to ourselves and our Posterity, do ordain and establish this Constitution for the United States of America.”

I think Chermerinsky is onto something, in terms of how we should be thinking about the Constitution. Decisions on issues like gun control and campaign finance reform should reflect those Constitutional purposes. Let's think about "gun control," for example, in connection with the Constitution's commitment to "domestic tranquility." Seems like there is an important relationship right there!

Just to add on, let's also not forget that the Constitution was (and I would say still is) a "revolutionary" document.

Let us not forget that "revolution" is what this country is supposed to be all about!