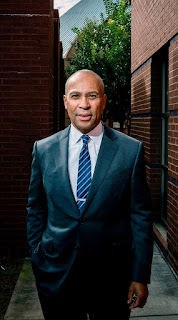 Deval Patrick is the former Governor of Massachusetts. He is pictured to the left. Patrick is contemplating a run for president, as a Democrat, in the upcoming 2020 elections.

Those who would like to know more about Patrick might want to consult a recent profile in The New Yorker.

In The New Yorker profile, Patrick told a story that I think makes an important point.

In 2014, as Governor, Patrick committed Massachusetts to accept young refugees from the Mexican border, and he described a visit to a Home Depot just after he had made his public announcement about this decision:

“I was confronted by a man in the checkout lane who just let me have it,” Patrick said. “‘Governor,’ he said, ‘I can’t tell you how strongly I disagree with your decision.’ He said, ‘My own wife is an immigrant, she came here legally, that’s the way it ought to be. I think you’re wrong.’ Now, he wasn’t threatening, but he was loud and he was angry and everybody in line knew who was angry at whom and what he was angry about."

“It struck me that something is so wrong when we learn to shout our anger and whisper our kindness,” Patrick said. “We have got to learn to stop being ashamed of being kind."

I do think that's good advice, and I would also suggest, when someone is shouting at us, that we don't shout back!