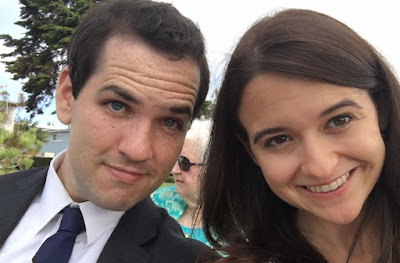 On Thanksgiving Day, I got an email letter from Ezra Levin and Leah Greenberg. They are pictured above. Their letter is reproduced at the end of this blog posting. Levin and Greenberg are the Co-Directors of Indivisible, a group seeking to "remake our democracy." Indivisible was formed in reaction to the election of President Donald J. Trump in 2016. I got to meet Leah and Ezra at a small fundraiser in Menlo Park, and was impressed. There is a very active Santa Cruz Indivisible group, one of thousands across the country. I am supporter of the Indivisible effort, and I certainly encourage others to join up and to contribute.


The entire letter from Levin and Greenberg tells a "Thanksgiving Day story," and makes an appropriate follow-up to my last two blog postings, celebrating our national holiday. Here is the part of the Greenberg-Levin letter that particularly got my attention. Greenberg says, as she describes her Thanksgiving Day search for a name for the group, not yet formed:

I thought about the Pledge of Allegiance. I had an idea. I tried saying it out loud: “Indivisible.” It gave us both goosebumps. One Nation, Indivisible. It was more than a word -- it was a promise. Because in this moment, with Trump poised to take power, when our democracy and our neighbors would be under attack, we would need to fight together, indivisible. That was the only way we’d make it through.

The fact is, our greatest political problem is that we all too often see ourselves only as "individuals," omitting to note that we are not only individuals. We are "in this together." It is only when we practice a politics that is premised on that truth that we will be able to realize our deepest aspirations, and to protect ourselves from the many dangers that threaten our future.

It could give us all goosebumps: "One Nation, indivisible, with liberty and justice for all."

Indivisibles,
This time two years ago, Ezra and I were in Austin for Thanksgiving, sitting at the kitchen table at his dad’s house.
We were still reeling from the election of Donald Trump, and looking for something -- anything -- that we could do to respond. The night before, we’d met up with a friend who told us about a Facebook resistance group she was managing and how they weren’t sure what to do to have an impact.
A light bulb went off.
We knew exactly how grassroots activists could have an impact -- as former congressional staffers in the early Obama years, we’d seen the Tea Party organize a powerful resistance that nearly brought Congress to a halt. What if we took the lessons we’d learned from that era, reverse-engineered them, and wrote a simple guide to making Congress listen? And then we could just put it out into the world, so that any new activists who were getting organized could read it. Maybe a few folks would put it to good use.
As soon as we came up with the idea, we were obsessed. We started an outline that night and started drafting the guide the next morning. Ezra’s family kept trying to get us to leave our laptops and hang out -- it was Thanksgiving! -- but the project just consumed us. It was the only thing we wanted to do.
That day, we decided this guide needed a name. The Tea Party had had a name rooted in American history, one that captured the imagination. What was something comparable for us, something rooted in our values and our history?
Ezra and I came up with a lot of bad ideas that just didn’t fit. Great Society. Four Freedoms. Then I thought about the Pledge of Allegiance. I had an idea. I tried saying it out loud: “Indivisible.”
It gave us both goosebumps. One Nation, Indivisible. It was more than a word -- it was a promise. Because in this moment, with Trump poised to take power, when our democracy and our neighbors would be under attack, we would need to fight together, indivisible. That was the only way we’d make it through.
A couple weeks later, Ezra tweeted out a link to the Google Doc: “Indivisible: A Practical Guide to Resisting the Trump Agenda.” Within an hour, the traffic on the doc was causing it to crash. And that very night, we started getting emails from folks all over the country who were angry and scared and organizing. People who would pick up the charge, start leading this movement, and help change the course of American history. People who would soon start calling the groups that they had formed “Indivisible” groups.
Yes, the Trump administration has been as damaging and cruel as we could possibly have imagined. But in response to something so incredibly evil, and dark, and corrupt, Indivisibles have responded with love, light, and determination.
This Thanksgiving, we’ve got so much to be thankful for. Two years in, we’re not just resisting hate, corruption and authoritarianism -- we’re insisting on a better future for all of us. Two years in, we have this hope for the future thanks to this incredible family of Indivisibles across the country who are making that hope possible.
Thank you for banding together, indivisible, with us.
In solidarity,
Leah and Ezra
Co-Executive Directors