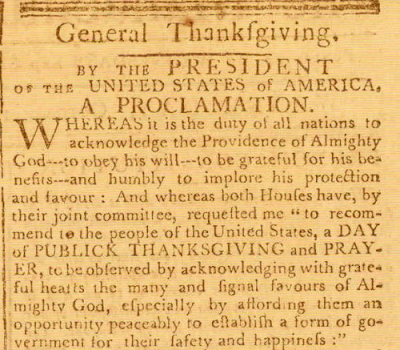 My advice, yesterday, was for us all to get ourselves into the "Gratitude Line." Today, following up on that Thanksgiving Day message, let me refer to a column that first appeared on Thanksgiving Day in 2014, written by Richard Samuels, who is Ford International Professor of Political Science and director of the Center for International Studies at the Massachusetts Institute of Technology.

Samuels' column, which came to me through the Law & Liberty blog, is titled, "A National Thanksgiving: President Washington and America’s National Holiday." The column explores what it means to be, or to call oneself, an "American," and particularly comments on how our nation has oriented itself with respect to religion:


Strictly speaking, to be an American is to be an American citizen. When one calls someone an American, the first definition one usually has in mind is political. By contrast, when one says that someone is Chinese or Turkish, the first thought is of an ethnic or racial identity. Even so, there is an American culture. Hence it is very common to say that something is “very American.” Thanksgiving itself deserves that moniker. Is it a constitutional observance? That’s an open question.

That to be an "American" is to be a person politically-defined is (as anyone who regularly reads these blog postings knows) a thought to which I heartily subscribe. And why is it an "open question" why Thanksgiving might, or might not, be a "constitutional observance?" Precisely because there is a religious overlay to the Thanksgiving Day holiday, and, as I recently noted, the very FIRST Amendment to the United States Constitution, the document that "constituted," and thus created, American government and our nation, is absolutely clear that:

This proscription against involving God in the political realm (that realm being, in fact, the very definition of the nation itself) has been of great benefit to the United States. This was the burden of my earlier comment. Still, as Samuels makes clear in his column, and as Washington made clear in his Proclamation, and as Jefferson and the Founding Fathers made clear in the Declaration of Independence ("When in the Course of human events, it becomes necessary for one people to dissolve the political bands which have connected them with another, and to assume among the powers of the earth, the separate and equal station to which the Laws of Nature and of Nature's God entitle them..."), the history of the United States of America has recognized from the very beginning the presence and existence of what 12-Step Programs call a "Higher Power."

When I urge us all to remember that we live in "Two Worlds," and ultimately in the "World of Nature," the world that God created, I am asking that we not forget this ultimate reality as we busily go about creating that "Political World" we most immediately inhabit.

To get into the "Gratitude Line," we need to acknowledge that there is someone or something to which we owe such appreciation. The Declaration acknowledged this presence as "Nature's God." Let us not forget that part of the American idea of who we are, and where we are.

No one can or should claim religious sanction in the political world in which we most immediately live, but we are putting all of human civilization at peril when we refuse to recognize that we do not, in fact, create ourselves, and that we are utterly dependent on the "Laws of Nature and of Nature's God."

"Americans" are defined by their right to be active creators of the political world that we most immediately inhabit. This is not a religiously-defined status, but we need to recognize that we operate, always, within a world that we did not create.

Abraham Lincoln, speaking of these matters, is quoted in the Samuels column as saying that Americans are "an almost chosen people." That is, indeed, a status for which we should all give thanks.