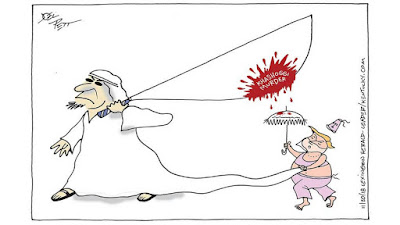 The above cartoon appeared in the San Francisco Chronicle on Friday, November 23, 2018. On the same day, the editorial I reproduce below appeared in The Wall Street Journal under the title, "Trump's Crude Realpolitik." Same day, different papers, but a common theme.

The editorial decries the president's statement on the Kashoggi assassination as failing to have referenced American "values." Are there, in fact, "values" that our national leaders should exemplify, when they can properly be seen as representing our nation? That would be nice, but I am of a mixed mind as I consider the criticism contained in The Wall Street Journal's editorial.

I surely agree that our president's statements about the brutal murder of a Saudi journalist, by agents of the Saudi government, deserves the rebuke that is delivered by The Wall Street Journal (and by the cartoon). If we are honest, though, as we pontificate about "America's values," we ought to admit that the United States of America practices a "realpolitik" that is fully as brutal as that exemplified by the assassination of Jamal Khashoggi. The Journal's editorial, mentioning our national support for the arms business, provides several examples. But May I refer you, also, to the assassination of hundreds, or even thousands, of people that the president nominates for drone-delivered death, with no due process whatsoever, and with absolutely no accountability. That is what the United States is doing, daily, in places like Pakistan, Yemen, Afghanistan, and Somalia.

"Realpolitik" is not the kind of politics that I think should dictate our national conduct, and if the American people want to feel good about our "values," we need to change our own behavior, not just point the finger at others.

President Trump did himself and the country no favor with his crude statement Tuesday on the U.S. relationship with Saudi Arabia in the aftermath of Jamal Khashoggi’s murder by Saudi agents.
Commenting on whether Crown Prince Mohammed bin Salman knew about the murder, Mr. Trump said in a statement only he could have written: “Maybe he did and maybe he didn’t!”
We are unsure of the purpose of the exclamation point here, just as we are unsure what goal Mr. Trump hoped to achieve with what can only be described as a raw and brutalist version of foreign-policy realpolitik.
The bloody realities of the Middle East and the clear threat from Iran, which Mr. Trump described in his statement, give any U.S. President some latitude in forging a policy toward the region that reflects America’s interests.
But we are aware of no President, not even such ruthless pragmatists as Richard Nixon or Lyndon Johnson, who would have written a public statement like this without so much as a grace note about America’s abiding values and principles. Ronald Reagan especially pursued a hard-line, often controversial, foreign policy against Soviet Communism, but he did so with a balance of unblinkered realism and American idealism. Mr. Trump seems incapable of such balance.
It is startling to see a U.S. President brag in a statement about a bloodthirsty murder that, in his “heavily negotiated trip to Saudi Arabia” last year, he did $450 billion in commercial deals, including $110 billion to benefit Boeing , Lockheed Martin , Raytheon and “many other great defense contractors.” From Mr. Trump’s point of view, U.S. interests in the Middle East can be reduced to arms deals, oil and Iran. That is crass; no other word suffices.
We don’t mean to join the critics who through moralizing glasses seem to be suggesting that the U.S. has no choice other than to sever its relationship with Saudi Arabia over this murder. That wouldn’t cause the Saudis to change their behavior or serve U.S. interests. The Saudis, as Mr. Trump asserted, are important allies in a still-dangerous war against Middle Eastern terror fomented and supported by the mullahs in Iran.
But Crown Prince Salman’s misjudgments have sometimes made protecting U.S. interests in the Middle East more difficult. He has shown himself to be reckless in his prosecution of the war in Yemen and willful in his dispute with Qatar. Even if he did not sanction Khashoggi’s murder, it’s clear he was aware that the journalist would be kidnapped and brought back to the Kingdom.
That too is bad judgment that should raise doubts about the Crown Prince’s reliability and effectiveness as an ally. The risk is that Mr. Trump’s public reduction of the relationship to crass interests is that the Crown Prince will feel he can do anything and suffer no diminution of U.S. support. We hope Secretary of State Mike Pompeo and National Security Adviser John Bolton are delivering a much tougher message in private.
Like any President, Mr. Trump also needs domestic allies in pursuit of a foreign policy that sometimes requires hard choices. Instead, Mr. Trump’s statement isolates him from his natural supporters on Mideast policy, such as Senator Lindsey Graham or Senator-elect Mitt Romney, who both separated themselves Tuesday from the President’s position.
The reality is that few members of Congress will align themselves with a statement bereft of asserting America’s abhorrence for the murder of political opponents. Without political or public support, Mr. Trump diminishes the odds that his Middle East strategy will succeed.