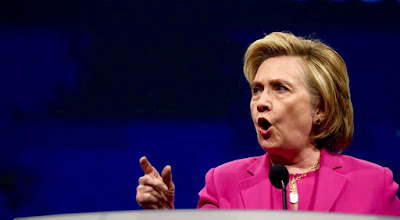 Monday's Wall Street Journal, which I read shortly after having written my "Do You Approve?" blog post, brought news from two of Hillary Clinton's political associates. They are stating, as a matter of fact, not supposition, that "Hillary Will Run Again." If you run into a Wall Street Journal paywall, trying to click through to that article, you can get the story here.

Apparently, there is going to be a 4.0 version of Hillary Clinton. That is what we are told:

Reinventing herself as a liberal firebrand, Mrs. Clinton will easily capture the 2020 nomination.

We currently have a president whose major preoccupation is himself. Hillary Clinton appears to be manifesting similar propensities.

In my view, the voters should not really be considering any politician who is mainly focused on winning for herself or himself, as opposed to advancing a particular set of policies for the constituents that the politician is seeking to represent. I do not think that the nation is hungering for a candidate who will "reinvent herself" for political advancement (i.e., portray herself in whatever way will be necessaary to gain support).

Maybe it's just me, but I am not looking forward to a Hillary 4.0.