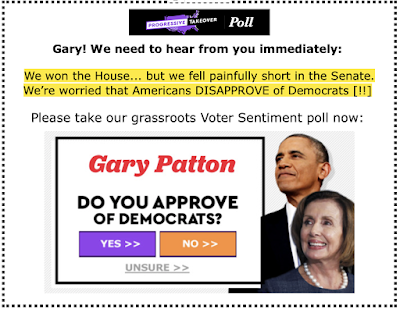 An email with the above question popped into my inbox shortly after the November 6, 2018, midterm elections. I bet a number of my friends got similar inquiries. Friends registered as Republicans might have received an inquiry like this from the Republican Party, too, but with the question rephrased to read: "[First Name Last Name] Do You Approve of Republicans?" The pictures of Barack Obama and Nancy Pelosi would have been substituted out, of course, replaced by pictures of Donald J. Trump and Mitch McConnell. At least the Democrats have a woman to include in this kind of political mailing! That is surely one point in favor of the Democrats.

My reaction upon receiving this email was as follows: What is the real question here? Does the "Progressive Takeover" group, which sent me the email, want to know whether I approve of all Democrats, no matter who they are and what they do? Is the question about Nancy Pelosi and Barack Obama, specifically (and does the "Progressive Takeover" group think that Pelosi and Obama are progressive?). Is it about the Democratic Party, in general? How about Bernie Sanders, does he count as a Democrat?

As those with even a passing familiarity with the United States Constitution know, the document "constituting" our government, and outlining how it works, says absolutely nothing about political parties. In fact, the concept advanced by the Framers posited a system of representative government in which voters from specific geographic areas picked individual persons to represent them in the Congress. Quickly, parties did appear on the scene, and a candidate's decision to identify himself (and, later, herself) with a particular party affiliation was information that the voters might well use to make a decision about who they wanted to represent them. The scheme was emphatically not that the voters would decide what party they wanted to represent them. Political systems based on that principle, and there are lots of them, are either parlimentary in nature or totalitarian. We are supposed to be working on the basis of a different approach, one that does not suggest that members of a political party cede their individual views to the party leadership. Read all about where that goes (with a Republican Party Member of Congress as an example) in a recent edition of The New Yorker.

So, here is my answer to the "Progressive Takeover" group that sent me this [offensive to me] email: "No, I do not 'approve of Democrats.'" I approve of candidates and officials who are working for the kind of government I think we need, and to advance the policies that I think would help the nation (and me personally). There are many "Democrats" who do not advance positions that I think are correct. Take Hillary Clinton, for instance. I do not approve of her commitment to American military intervention in the affairs of other nations, and her all-too-cozy relationship with the billionaire class. In November of 2016, I voted for Hillary Clinton because I disapproved of the other candidate, who called himself a "Republican," a whole lot more. My vote, however, was not on the basis of party. In the primaries, I voted for Bernie Sanders. In fact, I was a Sanders' delegate to the Democratic National Convention, where I witnessed in person how Hillary Clinton and the Democratic National Committee betrayed Democrats all around the nation, as it violated its own rules to hand the nomination over to the candidate who lost to Donald J. Trump.

If Democrats want to take back our country from the clutches of the narcissistic and irresponsible person who now "leads" it (and someone who calls himself a "Republican," of course), then I suggest that the Democrats should make an appeal to the nation that is not based simply on party allegience, or on feelings of personal repugnance for our president. That's just not persuasive, to me and to lots of other people.

Study up on how Alexandria Ocasio-Cortez managed to win her Congressional District election. It was because of how she campaigned and what she campaigned for. That's why she won. Incidentally, Ocasio-Cortez (like Bernie Sanders) doesn't primarily self-identify as a Democrat, but it wasn't the fact that she had a non-Democratic Party label that led to her electoral victory. It was how she conducted her campaign and what she stood for. Democrats could do the same thing if they wanted to; they could run that kind of campaign!

Democrats (I'm still registered as a Democrat, but with little allegience to the label) had better take heed! 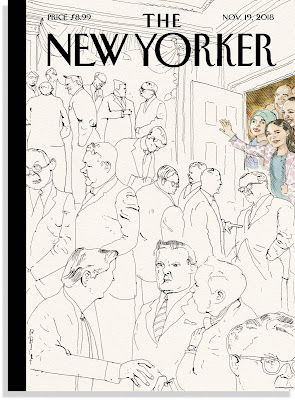