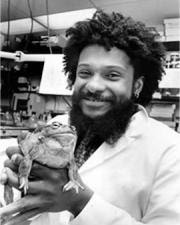 Pictured is Dr. Tyrone Hayes, a professor of integrative biology at the University of California, Berkeley. Hayes spoke at an evening banquet held during the 27th Annual Environmental Law Conference at Yosemite, the conference I mentioned in my blog posting yesterday. Hayes is a consumately engaging speaker. He described himself as "a little boy who loved frogs."

Hayes still loves frogs, and he seems to have a great love for people, too. He is best known, as Wikipedia notes, for:

Research findings concluding that the herbicide atrazine is an endocrine disruptor that demasculinizes and feminizes male frogs. He is also an advocate for critical review and regulation of pesticides and other chemicals that may cause adverse health effects. He has presented hundreds of papers, talks, and seminars on his conclusions that environmental chemical contaminants have played a role in global amphibian declines and in the health disparities that occur in minority and low income populations. His work has been contested by Syngenta, the Swiss manufacturer of atrazine and the Australian Pesticides and Veterinary Medicines Authority. It was used as the basis for the settlement of a multimillion-dollar class-action lawsuit against Syngenta.


Hayes received three standing ovations from the audience at the Yosemite Conference as he described his efforts to tell the truth about atrazine, and the damage it does to both frogs and humans. You can read a compelling story about Hayes in The New Yorker, "A Valuable Reputation," documenting how Syngenta, which manufactures atrazine, pursued an active effort to discredit Hayes and his work.

In all litigation based on demonstrating the harms caused by chemicals, proving "causation" is almost always very difficult. Consider the long course of the tobacco litigation needed to establish the fact that cigarette smoking is bad for human health. Chemical pesticides and herbicides pose an extreme danger to human and environmental health. By litigation or legislation, it's time to stop undermining the integrity of the Natural World that sustains us all.