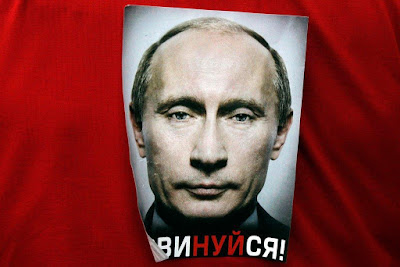 Trudy Rubin, who writes a regular "Worldview" column for the Philadelphia Inquirer, recently published her list of "beach reads on Putin." Everyone is entitled to her or his own opinion, I guess. I don't think that books on Vladimir Putin are the kind of recreational reading I would want to take along on a beach vacation.

Among Rubin's suggested Putin "beach reads" is Peter Pomerantsev's 2014 book, Nothing Is True and Everything Is Possible. Pomerantsev is a Soviet-born British journalist, author, and TV producer. I have mentioned his book in a blog posting once before.

If you would like a short description of Pomerantsev's book, read this article by Peter Conradi of The London Times. Conradi's article provides a little background on the Magnitsky Act, which plays an important role in the story that Pomerantsev tells. The Magnitsky Act also played a significant role in the collusion that either did, or did not, take place between Trump representatives and Russian government agents during the 2016 presidential campaign. Russia really wants to get rid of that Magnitsky Act!

I was interested in the Rubin column because it featured the title of Pomerantsev's book, which I think has a significant lesson to impart. I absolutely believe the "everything is possible" part of the title. In the human world in which we most immediately reside, "everything," in fact, is possible.

Normally, we are not much focused on this aspect of our human reality. We tend to assume and expect that what usually happens, or what has "always happened" in the past, is what will happen in the future. We allow ourselves to believe that what "is" is inevitable.

In the World of Nature, of course, this is actually correct. The "laws" that govern the World of Nature describe what must and will happen. As long as we are standing on the Earth, to take one example, we are subject to the law of gravity, and there is simply zero possibility that if we throw a ball into the air it will float away and never come down. In terms of the physical laws that define the Natural World, "everything" is definitely NOT possible.

Our human world is a world created by human choice and action; it is what I call a "political world." Our human world is not a world in which things will inevitably happen as they have always happened before. There are no "laws" that describe and define what must inevitably come to pass. Unlike the laws that govern the World of Nature, the laws in our world are "prescriptive," not descriptive. Our world is a realm of freedom and possibility, and everything is, indeed, "possible."

I believe that this truth about our human world became most clearly apparent when Hitler's Germany set up and implemented a system that murdered six million people, and accomplished this so successfully that Hannah Arendt, surely an acute observer of political realities, could describe the behavior of those who implemented this horror as "banal."

The fact that human beings could create this horror of mass murder, and make that horror into a routine social activity which was previously beyond imagining, made clear that "everything" is, truly, possible in the world we create. Good things are possible. And bad things. Whatever the nature of the realities we create, "everything" is possible in the political world which is our most immediate home.

But while everything is "possible," nothing is inevitable. Stalin's Russia created horrors that were similar to, though different from, the horrors created in Nazi Germany. The point is, after this history, we must now all realize that "everything" is within the realm of possibility. If we an imagine something, we can accomplish it (at least, it is not impossible for us to accomplish something that we have imagined). Maybe we should start having some "good" thoughts!

But what about the other half of Pomerantsev's title? I think that is vastly more problematic. Do we really want to concede that there is no "truth," and that nothing is true? I don't.

I think there is a good argument that the horrors perpetrated by totalitarian states are largely based on the acceptance by large parts of the society that there is, in fact, no "truth," or that the truth "doesn't really matter." Within Russia, a condition might exist that conforms to Pomerantsev's title: "Nothing is True and Everything is Possible." If such a place exists, then this is a warning that we must never concede that there is no "truth."

"Everything" really is possible, so if we can no longer test human action against the truth, the "everything" we will encounter (and create) will become a house of horrors, indeed.