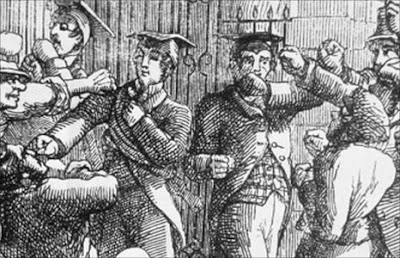 In "Merry Olde England," relationships between those attending Oxford University and the residents of the town of Oxford were, apparently, none too good. In fact, according to an engaging article appearing on the BBC website, physical confrontations between the residents of town and gown were common; murder was not unknown. Military intervention was sometimes required.

Aren't we so much better off, today?

Well, there haven't been any town-gown murders yet, here in the City of Santa Cruz, and the National Guard hasn't been turned out, but feelings between town and gown are certainly strained. In a recent Santa Cruz City election, almost 80% of City voters said the University should stop accepting any more students, in view of the incredibly negative impacts that growing student enrollments have had on the local housing market, traffic congestion, and water security. Fact is, those growing enrollments have undermined the quality of education at the local campus, too.

So far, the University has given no significant indication that it would be willing to terminate future student enrollments at UCSC and maintain the current enrollment level, which is approximately 19,000 students. The Chancellor's semi-official proposal, which has not yet been made final, and which has not yet been subjected to environmental review, is to add about 10,000 more students to the local campus, on top of the 19,000 students currently enrolled. That number doesn't count faculty and staff, of course. The local community is officially not pleased with the Chancellor's number of 10,000 new students (in fact, you could say the community is "outraged"). Unfortunately for the City, which otherwise does get to plan for its future growth, decisions about student enrollment are not made by the community. Outrage won't be enough.

In my view, since the people have spoken locally in such an emphatic way, this would be a good time for some local political leadership to take this issue to the UC Regents and the State Legislature. A claim that the University should be permitted to do whatever it wants to with respect to increasing student enrollments, without any responsible reference to the adverse impacts that the University's actions might have on a local community, is a claim that needs to be disputed. There is no reason to abandon hope that such a dispute can be resolved in favor of the local community. No murder or military intervention should be necessary. It won't be easy, however, to win this debate.

If our local political leaders will commit time, money, and energy to an effort to achieve what 80% of the local voters said they want, I think they can win the battle for us. It is irksome to have to expend lots of energy to achieve what should be obvious, but such is the way of the world. Unless the community mounts the effort, mobilizing every community resource we have, future student enrollment growth will give us an even bigger housing crisis than we already have, a housing crisis on steroids, and we will all be spending our time on gridlocked streets.

As James Herndon, who writes on education, has put it: that is not "The Way It Spozed To Be."