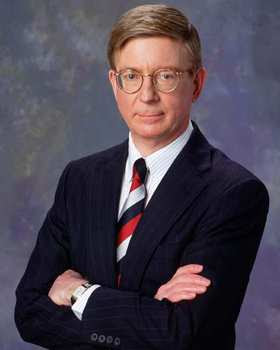 Pictured is George Will, who writes opinion columns for The Washington Post. The main purpose of my blog posting today is to "rebroadcast" and reflect upon a phrase from one of Will's columns. The column I want to comment upon appeared in The Salt Lake Tribune on October 10, 2018, and was titled, "Trump’s trolling vs. the ‘constitution of knowledge.’"

Will's column discusses the implications of what might be called the "Gresham's Law" of public discourse. Low-quality and untruthful discourse tends to drive out high-quality, truthful discourse, and that's not good! The state of our polarized and paralyzed politics provides a clear example of what happens when people abandon the idea that they are only supposed to say things, in public debate, that they believe are actually "true."

The need to preserve "honest" political debate and discussion is a topic I return to from time to time, since it is my idea that we most immediately "live" in a political world that we create, initially, through vigorous debates, which debates are then resolved by political decisions, and which political decisions then result in the laws that govern and define our world.

If our debates are corrupted at the very start, becoming nothing more than "trolling," to employ Will's characterization, then the result will never lead to the kind of  "constitution of knowledge" that can serve as the foundation for sound decision making.

One of my recent blog postings on this topic was published just before the 2016 election, and was titled, "Living In A 'Post-Fact' World." That blog posting, like Will's recent column, considered the impact that Donald J. Trump was having on political discourse, noting how Trump's "populist" approach to politics is driving normal policy-based debate out of existence, substituting "rallies" in which "trolling" is the norm. Here is how Will puts it:

Modernity began when humanity “removed reality-making from the authoritarian control of priests and princes” and outsourced it to no one in particular. It was given over to “a decentralized, globe-spanning community of critical testers who hunt for each other’s errors.” This is why today’s foremost enemy of modernity is populism, which cannot abide the idea that majorities are not self-validating.

It is that last phrase I particularly want to highlight, the idea that "majorities are not self-validating."


In fact, there is an inherent power in numbers, and those who have the power of numbers, the "majority," always want to claim that truth actually derives from power itself. In Will's phrase, that  claim equates to a belief that "majorities are self-validating."

Here is the difficulty. It takes genuine courage to speak truth against power, but it is absolutely something we must do. It is only by speaking truth to power that we can preserve our human world.