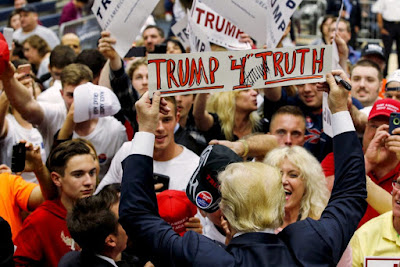 Peter Pomerantsev is a senior fellow at the Legatum Institute in London. He is also the author of Nothing is True and Everything is Possible, which documents the political reality of contemporary Russia.

Writing in Granta, Pomerantsev says that we are living in a "post-fact" and "post-truth" world. "Why We're Post-Fact" is the title of his essay. It's worth reading.

Pomerantsev's main point can be gleaned from his opening paragraph:

As his army blatantly annexed Crimea, Vladimir Putin went on TV and, with a smirk, told the world there were no Russian soldiers in Ukraine. He wasn’t lying so much as saying the truth doesn’t matter. And when Donald Trump makes up facts on a whim, claims that he saw thousands of Muslims in New Jersey cheering the Twin Towers coming down, or that the Mexican government purposefully sends ‘bad’ immigrants to the US, when fact-checking agencies rate 78% of his statements untrue but he still becomes a US Presidential candidate – then it appears that facts no longer matter much in the land of the free. When the Brexit campaign announces "Let’s give our NHS the £350 million the EU takes every week" and, on winning the referendum, the claim is shrugged off as a "mistake" by one Brexit leader while another explains it as "an aspiration," then it’s clear we are living in a "post-fact" or "post-truth" world. Not merely a world where politicians and media lie – they have always lied – but one where they don’t care whether they tell the truth or not.

Let me say, just to follow on, this seems to be a world in which WE, too, as members of the public, don't appear to care very much about whether or not politicians tell the truth.

This observation might be challenged, I know, since both Democrats and Republicans are vociferously complaining about the mendacity of the other side. But while Republicans denounce "lying Hillary," and Democrats hyperventilate about "dishonest Donald," the demonstrated lies of both Hillary Clinton and Donald Trump, brought to light by the opposing party, don't seem to affect political allegiances very much.

The fact is, neither candidate has shown much concern about the truth, and yet, demonstrated lying by a candidate doesn't shake his or her followers. That certainly conforms to what Pomerantsev is saying. Objections about "lying" from the other side are disregarded as mere markers of partisanship, and our partisan preferences apparently overcome any possible inclination to think that the truth or facts should matter when the candidate we favor is telling the untruths.

As I say, Pomerantsev's article is worth reading in its entirety. The following paragraph, from the middle of his essay, provides a philosophical framework for thinking about the issue (as opposed to the political framework I have just been discussing):

Maurizio Ferraris, one of the founders of the New Realism movement and one of postmodernism’s most persuasive critics, argues that we are seeing the culmination of over two centuries of thinking. The Enlightenment’s original motive was to make analysis of the world possible by tearing the right to define reality away from divine authority to individual reason. Descartes’ "I think therefore I am" moved the seat of knowledge into the human mind. But if the only thing you can know is your mind, then, as Schopenhauer put it, "the world is my representation." [And a product of your "will" - GAP]. In the late twentieth century postmodernists went further, claiming that there is "nothing outside the text," and that all our ideas about the world are inferred from the power models enforced upon us. This has led to a syllogism which Ferraris sums up as: "all reality is constructed by knowledge, knowledge is constructed by power, and ergo all reality is constructed by power. Thus . . . reality turns out to be a construction of power, which makes it both detestable (if by “power” we mean the Power that dominates us) and malleable (if by 'power' we mean 'in our power')."

Please note that the upshot of this philosophical analysis, if it is accurate, is that nothing will matter but POWER.

Like Faulkner, declining to "accept the end of man," I refuse to go there. I call upon all of us to rediscover the proven reality that we can build a political and material world that conforms to our deepest needs and aspirations when we "Speak Truth To Power," as the Quakers say!

If we speak the truth, we will no longer have to live in a "post-truth" world.