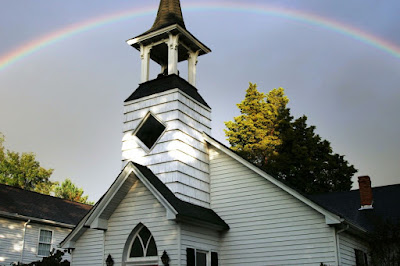 Robert P. Jones has written a book called The End of White Christian America. Jones is the Chief Executive Officer of the Public Religious Research Institute. PRRI is a non-profit, nonpartisan "think tank" that is dedicated to "conducting independent research at the intersection of religion, culture, and public policy."

And what does PRRI find at that intersection (the one with that nice old church on the corner)? Well, you have to read the book to get the full report, but the title does rather sum it up.

It used to be, according to Jones, that our political, cultural, and social life was dominated by a paradigm directly related to Christian religious principles (and these were, by and large, "Protestant" religious principles, and those Protestants were, almost overwhelmingly, White). Now, even Muslims are being elected to political office. So, if you thought that WCA was the "way it spozed to be," you had better say goodbye to all that. That is Jones' message.

White Christians (including evangelical Christians, who came somewhat late to the party, but then had a pretty good run, in terms of their cultural, social, and political impact) are now being forced to deal with the "Three R's": Remembering, Repentance, and Repair.

Jones does an Elisabeth Kübler-Ross style analysis of how WCA must now face the death of its past cultural and political dominance. "Religion," per se, doesn't come into the book very directly; the emphasis is on how White Christians have taken for granted that it is their prerogative to decide what being an "American" is all about. No more!

While I am both White and a Christian, I identify with being "American" more than I have ever identified with either of those other aspects of my personal situation. Thus, I did not much "see myself" in any of the descriptions that Jones painted of the now-disappearing WCA. To the degree that there has been a concerted effort, backed by money, to assert the political and cultural dominance of White Christians (and Jones makes a pretty good case that this has, indeed, been an intentional project since the early 1800's), I can only say, "it is high time for that effort to be terminated." Those who agree, but who might wonder what's happening now, will be comforted by Jones' "Afterword," which discounts any idea that WCA is making a comeback, in connection with the election of our current president.

If someone were to focus on what the Declaration of Independence and the Constitution have to say about religion, one would find that the very first statement in the Bill of Rights makes clear that the whole idea of a "WCA" is totally at odds with what this country is supposed to be all about:

This is the very FIRST statement in our Bill of Rights. Let's read that document as if it were a Protestant prayerbook. It has a lot to teach us as we leave behind a WCA that never should have existed in the first place.