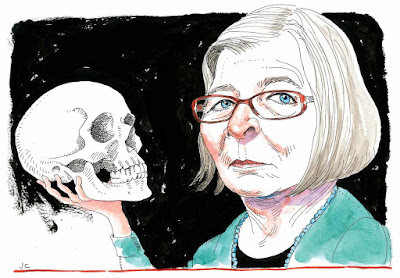 The Nation recently published a review of Barbara Ehrenreich's latest book, Natural Causes. The book is a personal and philosophical statement about death, and about how we should deal with death, and the review makes it seem like the book is well worth reading:

Natural Causes was inspired by a particular moment in Ehrenreich’s life: her acceptance of her own mortality. But that moment gives way to a broader inquiry into the biological, social, and political implications of the American denial of death. In fact, one reason the book is so compelling is that Ehrenreich moves fluidly back and forth between discussing our physical limitations, our social and political limitations, and the relationship between the two.

Ehrenreich begins with microscopic observations of cell behavior to paint a detailed yet accessible picture of the body in conflict with itself. Macrophages, she tells us, are the “blue collar workers” of the body, cells that dispose of dead and injured cells and eat microbes that have made their way past the barrier of the skin—so it’s easy to see them as the good guys, “the vanguard of bodily defense,” as Ehrenreich puts it. But more recently, scientists have discovered a sinister role played by these cells, at least “from the point of view of the organism”: They can serve as “cheerleaders on the side of death,” accumulating at the site of cancerous tumors and encouraging their growth.

Macrophages—and the cancers and autoimmune disorders these cells promote—increasingly seem to be not just an error or mutation, but something happening within the natural responses of the body. For Ehrenreich, this opens up a much more philosophical question about the very nature of human autonomy and control: “If cells are alive and can seemingly act in their own interests against other parts of the body or even against the entire organism, then we may need to see ourselves less as smoothly running ‘wholes’ that can be controlled by conscious human intervention, and more as confederations, or at least temporary alliances, of microscopic creatures.” Just as our efforts to control our individual bodies are doomed, Ehrenreich argues, so are our efforts as individuals to uplift ourselves. The interdependence and chaos created by the body also lead to the same conclusions as the interdependence and chaos created by modern life: We can’t just go it on our own.

The "bottom line" here is a lesson we need to continue to relearn. In politics, and in liffe (and death): "We can't just go it on our own."