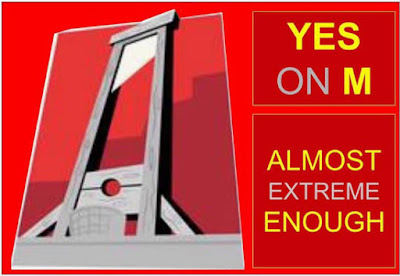 According to someone who has posted the graphic above on the website for the "Nextdoor" group covering my neighborhood, various proponents of Measure M, the rent control initiative measure that appears on the City of Santa Cruz ballot this November, are using this graphic in connection with the "Yes on M" campaign. The "No on M" group labels the measure, "Too Expensive, Too Extreme." According to this Nextdoor posting, here is a "Yes on M" come back.

I can't remember which of Shakespeare's characters said, famously, "the first thing we have to do is kill all the lawyers." As a lawyer myself, this idea of how to solve society's problems never quite warmed my heart. A proposal to kill all the landlords, the implication of this graphic, isn't going to warm the hearts of the landlords, either, many of whom (like many lawyers) aren't really the kind of bad people who should be marked for extirpation.

In other words, if this graphic is actually being used in connection with the "Yes on M" campaign (and whether or not that is true, I don't know), it's not what I would call "good politics." Kind of consistent with the Donald Trump approach to his political opponents: "Lock them up" (or, take them to the guillotine, if one happens to be handy). Saudi Arabia seems to have put this concept into current practice.

Besides providing my "this is bad politics" reaction to the graphic, I do want to make a substantive comment about rent control. The excesses of the private market are destroying the lives of the average and below average income members of my local community. I mean those who are employed here in Santa Cruz County in "ordinary" jobs. You know, the jobs that make the world work.

High-tech workers and others whose employment by Silicon Valley firms gives them salaries that are often double (or more) what ordinary workers here can earn are using their "gold" to "get the goods." That is to be expected, of course. Everyone wants to live in Santa Cruz, and if landlords set their rents to what the market will bear, and to make the most for themselves (and that is, exactly, what the private market suggests that they ought to do) then those with more income get the right to occupy the scarce real estate available in the community. Make no mistake, this is the "Golden Rule" of politics. Those who have the gold make the rules, and they get the benefits.

A good antidote for the bad effects of out of control individualism is collective action. In two words, "government regulation." That is tried and true. When private markets start having truly detrimental social impacts, the community as a whole can step in and establish a set of rules that makes things a bit fairer. That is what the Measure M proponents are suggesting. Some think the measure is "too expensive and too extreme." There's a judgment call there, of course, but the need for some kind of intervention in our current circumstances seems very clear to me.

I would like to remind any California residents who might be reading this blog posting that a YES vote on Proposition 10 could give the elected officials of Santa Cruz, as well as the elected officials of other local communities throughout the state, the right to craft a rent control approach for their local community that is neither "too expensive" nor "too extreme."

Whatever a Santa Cruz voter's view might be on the specifics of Measure M, if that voter agrees with me that some sort of collective response to our out of control rental market is absolutely needed, I urge support for a state measure that will return to local elected officials the ability to take action locally, in a way that they determine their local communities will support.

One final thought. When people get desperate enough, they do resort to violence. Marie Antoinette had advice for those who couldn't afford bread - and the popular reaction to her "let them eat cake" statement was, in fact, the guillotine. A society's continuing failure to make things "a bit fairer" will lead to violence almost every time.

We do know that - so we should know better. A resort to violence by those who are desperate is an observable phenomenon, throughout history. Wealth and income inequality is a national problem, and our national leaders, in giving ever bigger portions to the wealthy while cutting back on support and assistance to those who have little, are making things worse, and are daring the oppressed and distressed to try to do something about it.

"Politics" (and politics even at the local level) is how we can do something about it, without killing all the landlords (or the lawyers, or anyone else). Measure M is one attempt to do something about a real problem. We need to be sympathetic to those who are so graphically bringing the problem to our attention. If it's not "M," what's it going to be?

Just remember, by voting "YES" on Proposition 10, you will be giving our local elected officials an opportunity to try to answer that question in a positive and locally-acceptable way!*

* An article in today's San Francisco Chronicle indicates that current polling suggests that Proposition 10 is going to lose, even in the politically-liberal Bay Area. Those opposing Proposition 10 are quoted in the article, saying they "believe in a free market, free economy. Rent control may help certain people, but it disadvantages others." That is, of course, true - and that's the point; rent control advantages those who are being driven out of their homes. A "free market" means those with the most money get things; those who have less money don't get things, including basic necessities like food and shelter. Americans have always believed that it is both fair and appropriate for the government to step in to level the playing field when the "free market" starts having socially destructive effects. Minimum wage laws, for instance, are an example. When it comes to housing, which is a basic human necessity, the operation of the "free market" in Santa Cruz is resulting in a catastrophic housing crisis, in which ordinary working families are being thrown out of their homes. If you think local communities should be able to use their local government powers to try to make things a bit fairer, a "YES" vote on Proposition 10 is what's needed.