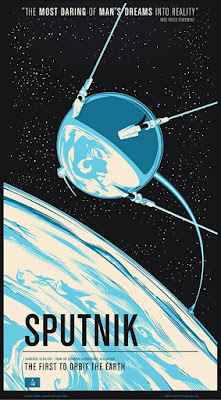 Roger Berkowitz, the Academic Director of The Hannah Arendt Center at Bard College, has published an article titled, "The Human Condition Today: The Challenge of Science."

As outlined by Berkowitz, Arendt slightly disagrees with the quotation from Bob Dylan, which I featured in my blog post yesterday.

Dylan suggests that our human doom began with "touching the moon." Arendt, as Berkowitz notes, says that the successful launch of Sputnik 1 was the key point. And Arendt doesn't use the word "doom," either, but she might just as well have.

Berkowitz' article explores, without ever using the term, what I call the "Two Worlds Hypothesis." I recommend the article. I do note, however, that both Berkowitz and Arendt seem to believe that when we say that "everything is possible" this should be taken to mean that everything is possible in both the human world and the World of Nature.

I don't think so!

In our world, as Arendt's seminal book, The Origins of Totalitarianism, showed us, "everything" is indeed possible. Horrible things beyond imagining are, in our human world, a possible outcome of human action. "Progress" is not inevitable, as was more or less taken for granted before the Holocaust, and the future of our human world will be determined by our own choices and actions. This truth about our human situation is why, to quote Bob Dylan once again, "we live in a political world."

Of course, "good things" beyond imagining are possible, too, as well as "bad things." As Arendt has made clear, perhaps most directly in On Revolution, every new human being coming into the world has the gift of freedom, which means the ability to do something that has never been imagined or thought of before, and by taking such action, in cooperation with others, to transform reality.

But the Berkowitz discussion, and presumably based on Arendt, who was a secular and not a religious thinker, seems to indicate that "everything is possible," not only in our human world but in the Natural World, as well.

There is no doubt, as Berkowitz' article makes clear, that we do think that having escaped the Earth, we are now free of earthly, natural constraints. The picture below shows one manifestation of the arrogance of this kind of thinking. Elon Musk seems truly to believe that we are no longer "confined" to the Earth and that we will, one day (if we are rich), be able to drive our spacecraft into the far reaches of the solar system (and possibly beyond), the same way we drive across the country, today.

I don't think so!

The difference between the human world and the World of Nature is this: WE create the human world within the World of Nature. We did not create, and cannot modify or replace, the Natural World,  a world upon which we are utterly dependent. For those who think that "science" has turned us from creatures who live within a world that we did not create, and that science has transformed us into some species of the  Creator, let me quote Bob Dylan once again.

What Dylan said to Columbus, in Dylan's 115th Dream, is what I would say to anyone who thinks that Elon Musk and Ray Kurzweil are correct in their claim that we will soon have the ability to "transcend biology."

The funniest thing was
When I was leavin’ the bay
I saw three ships a-sailin’
They were all heading my way
I asked the captain what his name was
And how come he didn’t drive a truck
He said his name was Columbus
I just said, “Good luck” 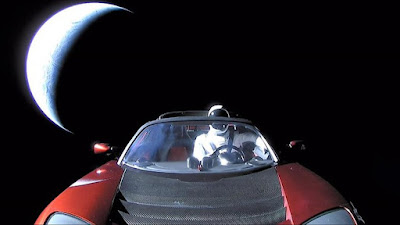