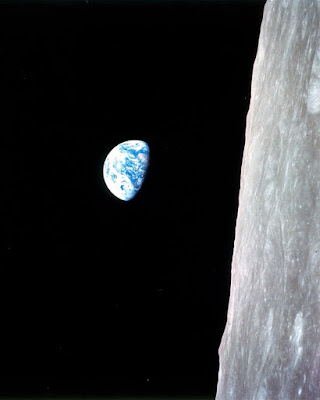 Man thinks ’cause he rules the earth
He can do with it as he please
And if things don’t change soon, he will
Oh, man has invented his doom
First step was touching the moon

Now, there’s a woman on my block
She just sit there as the night grows still
She say who gonna take away his license to kill?

These lyrics are from Bob Dylan's song, "License to Kill," which is found on his Infidels album (1983). They are particularly relevant to my "Two Worlds Hypothesis," which I continue to believe is worth thinking about.

The idea is simple enough. Though we assume and act as though we live in a single, unified "world," and that pine trees and the U.S. Capitol Building are congruent realities, that is not actually the case.

We live in two different worlds, simultaneously. Most immediately, we live in a human world that we create. Ultimately, however, we live in and are dependent upon the World of Nature. Humans may "rule" the Earth, but that doesn't mean that we can "do with it as we please." At least, we can't do what we please with the Earth without paying the price!

Humans do tend to think that we can do whatever we want to do with the World of Nature, but that is a big mistake. Let's take another look at those California wildfires (one of which is pictured below), and try not to fool ourselves about global warming. We are destroying both our human world and the Natural World by ignoring the laws that govern the World of Nature. 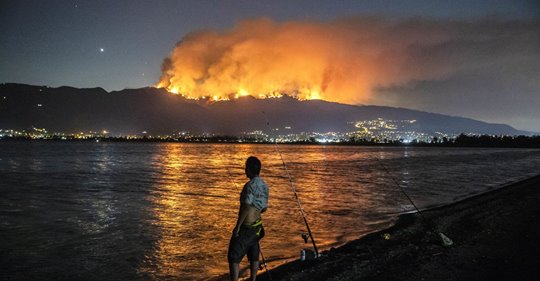 Some thoughtful observers have already declared "game over" for human civilization, based on our continuing human refusal to confront the global warming limits that ultimtely determine whether or not human life on Earth will continue. The fact that there are such limits is becoming ever more apparent. Is it really "game over?" This might be true.

But whether or not we are already at the end of the game, did it really all start with "touching the moon?"

I think that this assertion could be a kind of poetic license on Dylan's part, but a human determination to escape the limits of the Earth is definitely connected to the kind of human arrogance that continues to ignore all kinds of limitations imposed by the World of Nature.

I was intrigued by a recent article by Barry Vacker, writing in Medium. Vacker says that the picture at the top of this blog post is the "original" of the famous NASA "Earthrise" photo, the first photo of the Earth from space. Here is how we are used to seeing this picture: 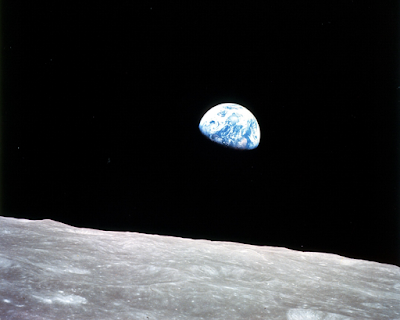 That isn't actually the way the photo was taken, according to Vacker. NASA "tilted" the picture to give Earth preeminence, something that Vacker says turns the photograph into "NASA’s Icon of Human Narcissism."

Rather than illustrate our actual place in the universe, the photo was altered by NASA to maintain the illusion of human centrality amid the cosmic void surrounding Earth. Five decades later, NASA’s move has proven prophetic for post-Apollo culture. Earthrise is the first “Earth selfie” and points directly toward the Anthropocene, social media culture, and humanity’s deep narcissism—still pretending to be the center of the universe, the center of all value, purpose, and meaning on Earth and beyond.

I think it is time to stop playing "let's pretend." Let's not pretend, anymore, that we are not utterly dependent on Planet Earth, and the World of Nature.

Who gonna take away his license to kill?