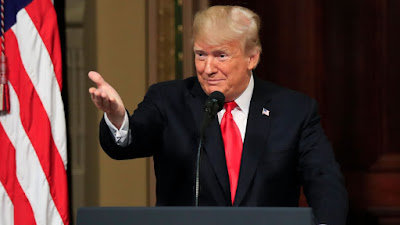 The New York Times ran two stories on Sunday, October 14, 2018, spotlighting our president's penchant for barnstorming political rallies. One article was titled, "The Trump Rally: A Play in Three Acts." The other article was titled, "A Guide to Trump’s Stump Speeches for the Midterm Campaigns." They are both worth reading.

I remember back to the presidential primaries, in 2016, before now-president Trump had secured the Republican Party nomination. I almost accidentally ended up watching a complete Trump rally, and my heart sank. Just looking at the rally, as someone with political experience, I had to admit that Mr. Trump was really good at what he was doing, building a strong political base of support for himself, and energizing voters for the things he was advocating.

He is still doing it, and I am similarly nervous about the current primary season. The fact that our barnstorming president is back on the road, whipping up the voters and demonstrating his political fervor for the political goals he is advancing, is not good news.

In connection with what I could call my version of the "Worried Man Blues," because I am worried, I must report on a column by Marc Thiessen, also appearing in my Sunday newspapers. Thiessen is a conservative columnist for The Washington Post, and his column on Sunday was called, "Trump could be the most honest president in modern history."

Considering that the president is so well known for his consumate and seriatum prevarication, what could Thiessen possibly be talking about?

Well, Thiessen is talking about the fact that President Trump appears to be carrying out his campaign promises - or at least he is trying to (which is exactly what our elected officials are supposed to do, and something that they rarely do in fact).

I am not about to start calling our president "Honest Don," but I do think Thiessen's point is well-taken. The American people are sick up to here with a politics that doesn't live up to its purpose, which is to reflect and accomplish the hopes and aspirations of the voters. A politician and an elected official who does that is rare.

I, personally, think that what the majority of the American voters hope for and aspire to is a future quite different from the future that is featured in the Trump rallies. But if those with different hopes and dreams want to have a government that can (and will) accomplish them, we're going to need candidates who seem "honest" in the way that Donald Trump seems honest.

I'm looking at what happens to Beto O'Rourke, in Texas. He strikes me as another one of those "honest politicians," but one with much better values.

We need a lot of those!