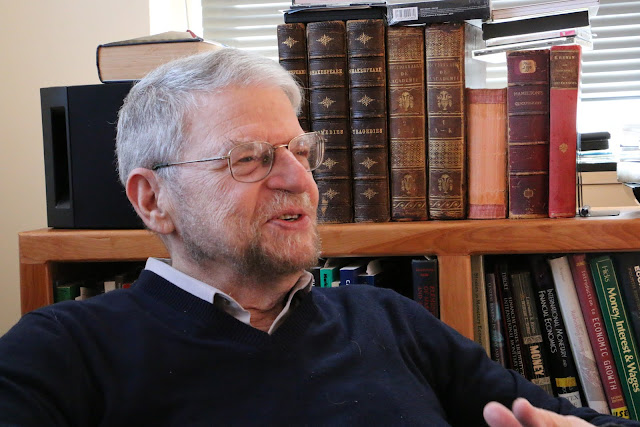 Arthur Goldhammer, pictured above, is a Senior Affiliate at the Center for European Studies at Harvard University. Goldhammer has translated more than 125 books from the French, and in an article in The Nation, published online on August 1, 2018, he looks back at the tumultous "events" of 1968 in France, and then at the '60's in both France and the United States.


Goldhammer's topic is "Freedom." Specifically, per the title of his article in The Nation, Goldhammer is asking, "What Is Freedom?" He turns to Isaiah Berln, and Berlin's 1958 lecture, "Two Concepts of Liberty," to help him find an answer:

To simplify Berlin’s arguments brutally, negative liberty was “freedom from,” or the enjoyment of a zone of noninterference, of guaranteed exemption from coercion, while positive liberty was “freedom to”—the freedom to be (or, more sinisterly perhaps, the freedom to choose) one’s own master. These, Berlin argued, might seem to be “concepts at no great logical distance from each other,” but in fact they were in “direct conflict,” because the adept of positive liberty might conceive of “the real self” as “a social ‘whole’ of which the individual is an element or aspect.” In pursuit of the will-o’-the-wisp of positive liberty, in other words, the individual risked surrendering herself to voluntary servitude, indentured to some seemingly transcendent cause; and then, sliding down a slippery slope, she might feel herself entitled to coerce others too “blind or ignorant or corrupt” to recognize what was in their own best interest.


Goldhammer, as an American, appears to assume that we all agree that "negative liberty," a zone free from coercion, is the bare minimum of what freedom requires. I think he is basically right about that. He appears to be most interested in the other pole, however, the possibility of "positive liberty." That is an idea that Berlin seems to find more problematic. Goldhammer indicates that the kind of freedom demanded by the young people who revolted against the French government in 1968, like the freedom demanded by  the "blissed out hippies" in the United States, was the freedom to "live more."

In fact, Goldhammer describes a sense of "social freedom," that he seems to identify as related to the "positive freedom" that he yearned for, and briefly found, before losing it when he was drafted and sent to Vietnam. This was a heady and romantic sense of freedom which, as I understand it, Goldhammer now believes separates him from many of those with whom he served in Vietnam. Many of his former comrades in arms are not enjoying the kind of lifestyle or economic success that Goldhammer has enjoyed, and so any demand to "live more," coming from someone in Goldhammer's situation, seems unpardonable and obscene.

I am only a couple of years older than Goldhammer, and thus lived through those same times, though I was never "blissed out" or a "hippie," and I completely missed the sense of social freedom that Goldhammer discusses and identifies as "romantic."

I did want, though, and still do want, our freedom to include not only the bare minimum of "negative liberty" but "positive liberty," too. Unlike Goldhammer, at least as I am understanding him, I do not identify this "positive liberty" as a kind of social freedom. I see it in political, not social, terms. I see it as a demand that I, joining with others, should be able to transform the economic, social, and political realities of our current world, so that we can make, together, a new and better world, one that will more adequately respond to what I believe is a collective desire for justice and equality.

In seeking to comprehend and utilize such "positive liberty," I think we should be seeking to make common cause with exactly those disaffected comrades from whom Goldhammer appears to feel both distanced and disaffected.