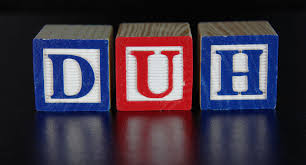 I read a lot of newspapers each morning (five), and I sometimes find that two different articles, on two different topics, seem to relate in some way. So it was on Sunday, August 26th.

I first read an article in The New York Times Magazine, titled "Clear Cut," pointing out that things that seem "clear-cut" to one side of our current political debate are not at all clear to the other side. Then I turned to The New York Times Book Review, which carried an article titled, "A Palestinian Neighbor Responds." This article reviewed a book by Yossi Klein Halevi, Letters To My Palestinian Neighbor.

In "Clear Cut," Nausicaa Renner, digital editor of the Columbia Journalism Review, suggested that the political truths that we have been in the habit of taking for granted, as "obvious," are no longer obvious at all. If American politics seems divided today, this may be part of the problem:

Politicians and the press still invoke obviousness in the hope of summoning some conviction we all still share, some bedrock of group belief we can agree on. To see them fail, repeatedly, is unsettling; it makes our deepest values seem impotent. It had seemed obvious to some that a modern presidential administration would not defend white nationalists or that the United States government would seek to avoid taking babies from their parents’ arms — or that a man who bragged about harassing women wouldn’t be elected in the first place. Last summer, NPR celebrated the Fourth of July by tweeting, line by line, the text of the Declaration of Independence; its account was immediately attacked by angry Americans accusing the organization of spreading seditious anti-Trump propaganda. The nation’s founding values have come to seem, somehow, unfamiliar and contentious; we can’t recognize the Declaration of Independence when we see it. Let the obvious sit too long and it becomes like an animal in a zoo: pointed at, but never exercised, and idly wandered past by people who have forgotten how powerful it is in action.

In his article, "A Palestinian Neighbor Responds," Raja Shehadeh reviewed Yossi Halevi's Letters To My Palestinian Neighbor. Shehadeh indicates that he was offended by Halevi's book. Halevi is a New York Jew who had lived for thirty-six years in Palestine, and it is clear that his book was Halevi's attempt to be reconciling. Shehadeh didn't see it that way:

“The purpose of Judaism,” as you see it, “is to sanctify one people with the goal of sanctifying all people.” The Palestinians don’t need to be sanctified by Israel. We simply want the right to control our fate, a desire I know you must understand well from studying Jewish history.

I agree with you that peace can come only if we succeed in sharing this land and living on it with justice and fairness for both nations. And I will forever agree with your sentiment that the “violence, suppression, rage, despair” that characterizes our relationship must end. But perhaps the problem with your letters is that they don’t read as if they are seeking an answer, hoping for that Palestinian neighbor — me — to respond, but instead seem like lectures, half a conversation with a partner who is expected to stay quiet and listen.

Halevi surely thought it was obvious that his book was a reconciling statement, an effort to reach out to his "Palestinian Neighbor." But to have a genuine dialogue with anyone, you can't take anything for granted. Nothing is "obvious," and when you begin with "obvious," you are going to wind up nowhere, fast. Assuming that something is "obvious" will seem condescending at best, and may well be seen as belligerent.

The picture at the top of this posting accompanies an article titled, Why You Should Never Use the Word “Obviously.”