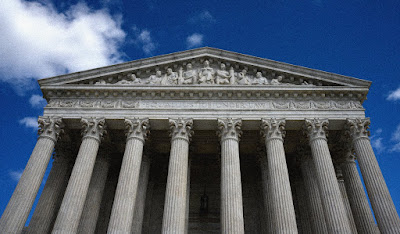 I have mentioned David Kaplan's most recent book in an earlier blog post. Titled, The Most Dangerous Branch, Kaplan's book apparently suggests that the Court might have become "too powerful." At least, that's the way NPR has characterized it.

My earlier reference, which came from The Wall Street Journal, focused on the fact that our most important "political" questions have now been transmogrified into "judicial" questions, to the detriment of both our judicial system and our democracy.

I have not yet read Kaplan's book, but I ran across an excerpt from the book in Longreads. That's where I got the picture at the top of this posting.

I commend this excerpt to you. It is not really that "long" a read, and it gives a very good sense of how the Court always tries to present itself as "the closest thing we have to a secular shrine."

Hannah Arendt, who felt that the United States Constitution had established ("constituted") the best example in history of a genuine and democratic self-government, approved of the near-religious reverence that the Court has almost always enjoyed.

If we make the Court "political," and if we come to believe that "political" is the right term to describe its role in our democracy, our losses will be immense.