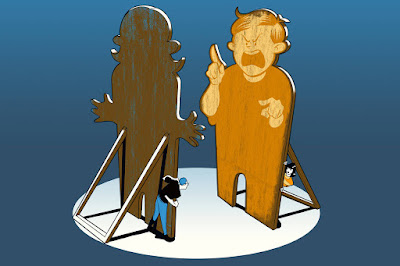 My blog posting yesterday referenced the views of a former Prime Minister of Australia, Tony Abbott. Abbott "sized up" our current president in an article in the July 14-15, 2018, edition of The Wall Street Journal, with Abbott finding a lot to be positive about. I suggested that those who are not so positive, and who want to elect a new president (I'm raising my hand), need to be able to understand the arguments of those who can see some "good" in what President Trump is doing.

Another article in that same edition of The Wall Street Journal article was titled, "We Need Better Arguments." This title does not signify that the article is urging those with differing opinions to hone their rhetoric so as to prevail in a debate. Rather, the word "argument," in the context of that article, means the actual exchange of views itself, the actions and efforts taken by parties with differing opinions to persuade others to "their side." The article, in other words, is really making much the same point that I was trying to make yesterday.

Walter Sinnott-Armstrong, who wrote the article I have referenced, is the Chauncey Stillman Professor of Practical Ethics at Duke University. I think he provides good advice: be candid; be respectful; be patient.  I think his article is worth reading.