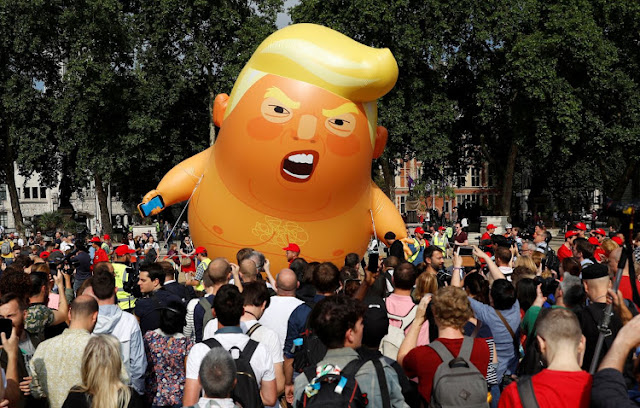 Tony Abbott, a former Prime Minister of Australia, is pictured below. We all know who is pictured above!

The "Baby Trump" balloon, flown over London on July 13th, was meant to portray our president in an unflattering light. In fact, President Trump was insulted by the balloon, and said so, but there were undoubtedly many at home and abroad who believe that this balloon portrayal of our president was fully justified by his behavior. Most of the people I know (and I join them) have a very poor opinion of President Trump, and don't like the way he conducts himself. The balloon portrayal could be said to "speak to our condition," to use a Quaker phrase.

Former Prime Minister Abbott has a more positive view of our president, which he put forward in an article headlined, "An Ally Sizes Up Donald Trump." That article ran in the Saturday-Sunday, July 14-15 Wall Street Journal, and I think we should pay attention to what the former Australian Prime Minister has to say.

Before I tell you what Mr. Abbott has to say about President Trump, let me acknowledge that one of Mr. Abbott's first political involvements was as a director of Australians for Constitutional Monarchy. Since there are reasonable grounds to think that President Trump's natural inclinations are "monarchical," not democratic, Mr. Abbott's support for monarchy as a form of government could indicate a natural sympathy for the way Donald Trump approaches politics.

But let's focus on the content of Mr. Abbott's comments, not on the source. Here is what he says about President Trump (and these are judgments I do think we need to hear):

For someone his critics say is a compulsive liar, Mr. Trump has been remarkably true to his word. Especially compared with his predecessor, he doesn’t moralize. It’s classic Trump to be openly exasperated by the Group of 7’s hand-wringing hypocrisy. Unlike almost every other democratic leader, Mr. Trump doesn’t try to placate critics. He knows it’s more important to get things done than to be loved.

The holder of the world’s most significant office should always be taken seriously. Erratic and ill-disciplined though Mr. Trump often seems, there’s little doubt that he is proving a consequential president. On the evidence so far, when he says something, he means it—and when he says something consistently, it will happen.

He said he’d cut taxes and regulation. He did, and the American economy is at its strongest in at least a decade. He said he’d pull out of the Paris climate-change agreement and he did, to the usual obloquy but no discernible environmental damage. He said he’d scrap the Iranian deal, and he did. If Tehran gets nuclear weapons, at least it won’t be with American connivance. He said he’d move the U.S. Embassy to Jerusalem, and he did, without catastrophe. He said he’d boost defense spending. That’s happening too, and adversaries no longer think that they can cross American red lines with impunity.

In Mr. Trump’s first year, he acted on 64% of the policy ideas proposed in the Heritage Foundation’s “Mandate for Leadership” agenda—not bad compared with Ronald Reagan’s 49%.

It’s a pity that he kept his promise to pull out of the Trans-Pacific Partnership. But his concerns about that deal shouldn’t be dismissed. In the short term, freer trade can be better for rich people in poor countries than for poor people in rich ones.

Mr. Abbott has a few more things to say, as well, and some of them are a bit more critical, but the quotation above gives a pretty good summary of how Abbott "sizes up" our president.

I think it is important that we pay attention to this evaluation because I believe it comes across as a  relatively "fair" summary of the president's record, from someone who is trying to present that record from a sympathetic perspective. If we want different policies (and a different president), we need to make our own arguments as persuasive as we can make them. We can't just ridicule the president, in other words, because we will then just be talking to ourselves. We need to be able to talk to people like Tony Abbott, who admits that President Trump is "erratic and ill-disciplined," but who then goes on to recognize what he regards as some very positive features of the president's personality and presidency.

In the elections upcoming this November, and the elections coming in 2020, those who oppose the president and his policies need to be able to talk to voters who have a somewhat sympathetic view of the president, like the view that Abbott has. Lots of people, not just Tony Abbott, have some sympathy for President Trump, even though they don't much like the way he behaves.

Too often, I fear, the president's opponents are so outraged and appalled by the way he conducts himself that they forget that large numbers of voters, who may not like many things about the president, do have some positive views of the president, and think that the president is "following through" on his promises, and is "keeping his word" to the American people. Those who know that the president is more apt to lie than to tell the truth may assume that everyone will see him as we do, and as people in London saw him when the "Baby Trump" balloon flew over the London skyline.

Not everyone sees our president as a churlish, bullying, ignorant baby. If those who do see him that way want to win elections, we need to be persuasive to at least some of the people who don't see him that way, who may see him exactly as former Prime Minister Abbott sees him.

These are views we need to hear so we can address them in ways that will be persuasive to those who hold them. Laughing them off, or making fun of them, is not likely to be a good electoral strategy.