#248 / Why Republicans Stick With Trump 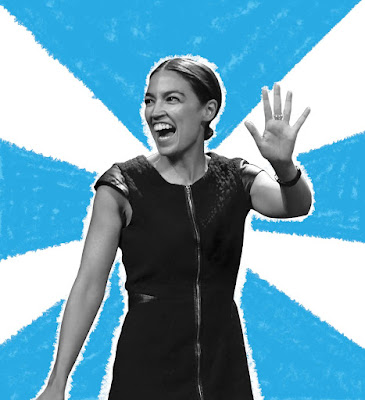 The picture above is of Alexandria Ocasio-Cortez, featured in an article in a recent edition of The Nation magazine. The article is titled, "The AOC Effect." It is worth reading.

The picture of Alexandria Ocasio-Cortez is a lot more energizing and appealing than a picture of Bobby Jindal would be. You may remember his name. Jindal ran for president in 2016 (and lost, as we know all too well). From 2008-2016, Jindal was the Governor of Louisiana. Here is Jindal's picture, from Wikipedia, just for comparison purposes: 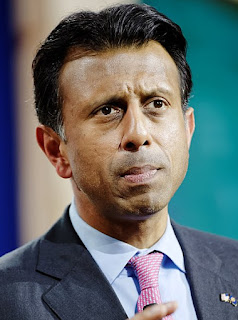 Jindal attempts to respond to an obvious question. Since Donald Trump seems pretty clearly to be the most dishonest and personally disgusting person ever to serve as president, why don't members of the Republican Party do something? In case that question has ever crossed your mind, Jindal has the answer. The fact is, Jindal says, although "Mr. Trump [has] broken from GOP orthodoxy on free trade, immigration and entitlement reform ... not to mention the personal scandals and the never-ending tweets," Trump is delivering on key conservative issues:

As Jindal sums it all up: "It isn't unusual for a politician to change positions. Unsurprisingly, voters tend to be more forgiving of flip-flops when they agree with the final result."

This is why the Republicans are supporting Mr. Trump. He's a personally disgusting liar, but he's their liar. [Again, that is my own editorial comment.]

The article about Ocasio-Cortez is not, actually, irrelevant in the context of this conversation about Jindal's review of why Trump has not drawn fire from leading Republican Party authorities. The article in The Nation documents how Ocasio-Cortez is going around the country speaking to voters far from her New York City home, which happens to be quite politically progressive, urging a program that would pretty much be the polar opposite of the list Jindal provides, as summarized above. Some Democrats are questioning whether an honest advocacy of her progressive ideas is politically wise.

My view is that the election this November should be focused on the "issues," not on the personal deficiencies of the president, as abundant as those are. Jindal says that the Republicans are supporting Mr. Trump because he is delivering what "the voters" want. Jindal is clearly speaking about Republican voters, and maybe only part of them. Let's see what programs "the voters" actually support. My strong bet is that the voters would actually prefer a program like the one being promoted by Ocasio-Cortez and that the voters will "forgive" the Democratic Socialist label, even if they might be nervous about it, if the voters get focused on the substance.

It is tempting to campaign against our dishonest and disgusting president, on personal grounds, but that may not be the best way. I think, as Ocasio-Cortez does, that campaigning on "the issues" is a political winner, and not just in those so-called "blue" districts, either.

One nice thing is that in the case of the Ocasio-Cortez program, nobody on the progressive side has to lie about it, either.