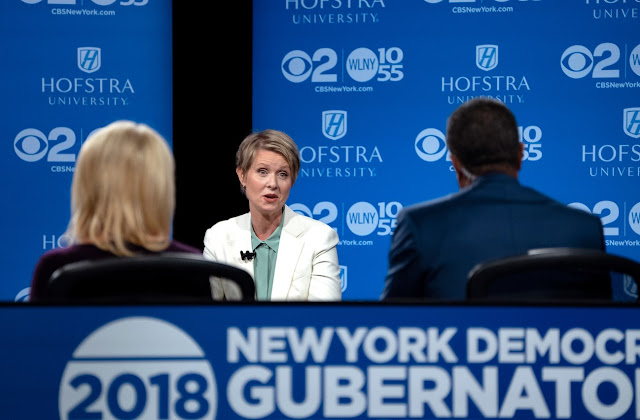 Cynthia Nixon, pictured, is an actress, perhaps best known for her appearances in Sex and the City. Most recently, Nixon has become a long-shot candidate for Governor of New York, running against incumbent Andrew Cuomo.

In a recent article in The New Yorker, Masha Gessen faulted both Nixon and Cuomo for their failure to understand "politics." Her comments are worth reading. In essence, Gessen criticized Cuomo for his suggestion that "politics" has no place in government, which Cuomo analogized to the operation of a major corporation. Gessen criticized Nixon for not making clear that Cuomo got it wrong:

The first question posed to Nixon concerned her qualifications for the job. Maurice DuBois, a CBS anchor, asked, “What in your experience and background should give voters confidence that you can run a state of twenty million people and a budget of almost a hundred and seventy billion dollars?” Nixon responded by pointing to her seventeen-year record of activism. She had campaigned for more equitable funding for public schools, she said, noting that New York State has “the second most unequal” education system in the country. She had campaigned for marriage equality, helping to raise eight hundred thousand dollars that funded opposition research on several state senators who opposed same-sex marriage—an effort that helped cost three of these senators their seats.

In his rebuttal, Cuomo attempted to render her experience irrelevant. “The governor of New York is not a job about politics,” he said. “It’s not about advocacy—it’s about doing. It’s about management. This is real life. . . . You are in charge of fighting terrorism. You are there in cases of fires, floods, and emergencies, train wrecks. You have to deal with a legislature that’s very, very difficult.”

Imagine if, in response to the moderator’s question, Nixon had said, “A state is not a company—the governor doesn’t ‘run’ it. The question is not whether I can balance a budget, put out a fire, prepare for a flood, or prevent a train wreck. There are professionals who can do any of those things far better than I. The question is whether I can lead and inspire those professionals and millions more people to forge, in this state, a more equitable, safer, better society that we all want to live in.”

She did not, of course, say that. It seemed that the moderator and both candidates shared an understanding of government and politics, a view that considers a governor (or a mayor, or a President) the chief executive and politics the process of hiring that chief executive. This person “runs” a state: she is competent in an emergency and may gain relevant experience by raising money or doing opposition research.

Politics (not government) is, and ought to be, our first priority. Points to Gessen for highlighting that fact!