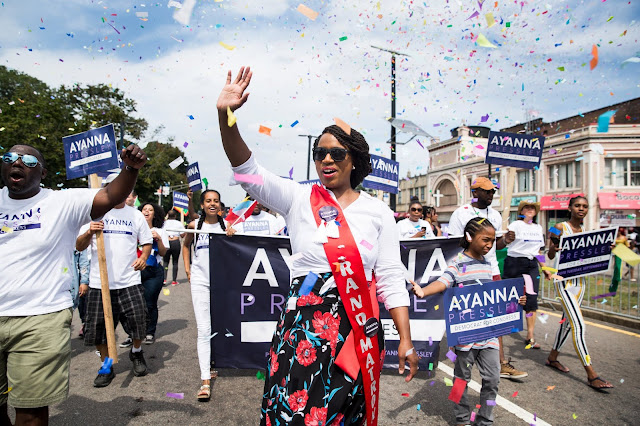 It turns out that Tuesday's Democratic Party primary in Boston has reproduced, in that different community, the kind of victory that The Nation celebrated when Alexandria Ocasio-Cortez, a young woman of color, defeated a well-established, liberal Democratic politician in New York City. Joe Crowley had represented his Brooklyn Congressional District for years and was a top Democratic Party leader in the House of Representatives. Ocasio-Cortez, who had never held elective office, blew him away.


In Boston, the woman who won, pictured above, is Ayanna Pressley. She defeated a well-established and liberal Democrat, Michael Capuano, who had represented his extremely liberal Boston district for twenty years. Pressley was not a political neophyte, though. She has served on the Boston City Council since 2009. Thus, she is not quite the newcomer that Ocasio-Cortez is. Still, Pressley's election was a big upset! Also, Ocasio-Cortez did campaign for Pressley, so that Pressley's victory can be chalked up to that "AOC effect" that The Nation is hoping will be a real thing in Democratic Party politics this year.

I like what Pressley has had to say about her campaign (and her primary election victory):

Pressley also campaigned on the promise to provide “activist leadership,” beyond the votes, whether the Democrats retake the House or not.

Votes are important. "Activist leadership" is, too.

In fact, activist leadership may be even more important than votes. That's what gets those votes to the polls!